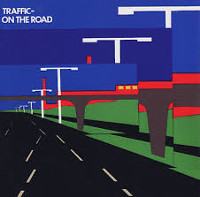 Maybe the prospect of a 15-minute “Glad” makes you, well, happy. But I would tell you that On The Road, at least in its double-elpee incarnation, is one of the lamest live albums I’ve ever heard, and I’ve heard Welcome To The Canteen. The single-elpee version is less painful, as it presents the better half and begins with “Low Spark of High Heeled Boys,” which I could listen to on an endless loop for hours. But the band’s jammy, jazzy approach to these songs falls flat; the Grateful Dead they’re not. The chemistry between Winwood and Barry Beckett on “Glad,” for example, is poison. Chris Wood, meanwhile, is only a marginally better saxophonist than David Bowie, and certainly not up to the task of so many solos. (In his defense, the flute solo on “Shoot Out At The Fantasy Factory” isn’t half bad.) The rhythm section of David Hood and Roger Hawkins is competent but colorless; maybe Winwood had to pay them extra for solos, I don’t know. The only redeeming moments on this concert come during Winwood’s guitar playing and Reebop Kwaku Baah’s possessed percussion playing. It’s a sad day when you’re pointing out how good the conga player is in a seven-piece band. I was surprised to read that a lot of people seem to like this album. I’ve never been impressed with Traffic’s live recordings, and the timing of this one is especially poor: the band was half-made of hired hands and coming off the lackluster Shoot Out At The Fantasy Factory. If you’re expecting that the Shoot Out songs get a better shake on stage, they don’t; “(Sometimes I Feel So) Uninspired” shakes off its sleepy chains for a short guitar solo, but soon returns to the same lethargic pacing. In my opinion (and the two cents that it’s worth), On The Road is one of Traffic’s least interesting avenues and best left to those people who thought the songs on Shoot Out At The Fantasy Factory weren’t long enough the first time.

Double LP Version
A1. Glad
A2. Freedom Rider
B1. Tragic Magic
B2. (Sometimes I Feel So) Uninspired
C1. Shoot Out At The Fantasy Factory
C2. Light Up Or Leave Me Alone
D1. Low Spark of High Heeled Boys

[Review] Traffic: Shoot Out At The Fantasy Factory (1973)