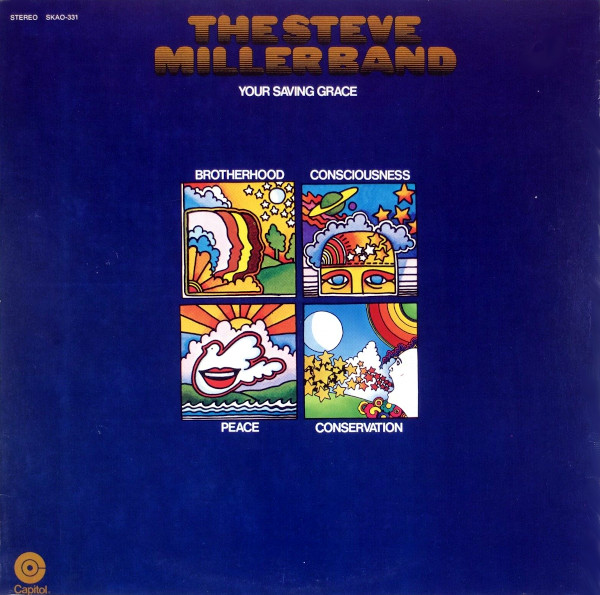 The pressure of releasing an album every six months was beginning to reveal some cracks in the material.

The Steve Miller Band’s fourth album is a little light on material, which is what happens when you release four albums in two years. It’s not a stylistic step forward from their last album, Brave New World, but a holding in place as the band sticks to psychedelic blues rock with a pronounced Beatles influence (although Traffic and Led Zeppelin can be glimpsed in the shadows). The album’s saving grace is its production, with Glyn Johns again taking an active hand by playing guitar and percussion on several tracks.

There isn’t a standout track on Your Saving Grace. Little Girl didn’t light up the radio as the single, but it’s a groovy blues-rock number featuring a multitracked Steve Miller on vocals and guitars. Baby’s House, cowritten with special guest Nicky Hopkins, is an epic acoustic/electric number that had me thinking of Zep’s “Your Time Is Gonna Come.” My favorite song on here is a trippy version of Motherless Children that gets to the heart of the song’s sadness as few artists have. The closing Your Saving Grace, one of two tracks featuring Tim Davis on vocals, holds its own with any of Dave Mason’s contributions to early Traffic.

The rest of the album is more or less filler with aggressive production that sometimes works and sometimes doesn’t. Your Saving Grace has had few champions over the years, marking the soft middle between Steve Miller’s first three albums and his commercial breakthrough, The Joker. I’m not sure I’d call any of these mid-period albums a compulsory purchase, although there’s some joy to be had in hearing Steve Miller sing and play guitar, and a little extra joy in hearing Glyn Johns try out some psychedelic sound effects to punch it up.