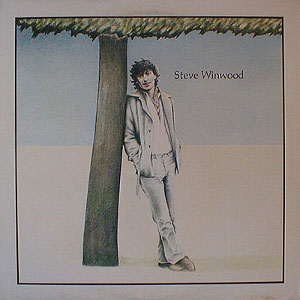 Kronomyth 1.0: NO HITS, NO NAME, NO WONDER. Often lost and forgotten, Steve Winwood’s first official album was the second ill omen of nineteen hundred and seventy-seven, Peter Gabriel’s hodgepodge of pop and pomp being the other. Rolling Stone’s critics gave Winwood a pass on this one, but you’d have to be pretty mathematically challenged to think six songs and no hits after three years could add up to anything but disappointment. Whatever failings it had, at least Gabriel’s album gave an account of his long exodus from Genesis with “Solsbury Hill.” Anyone looking at Steve Winwood’s album, on the other hand, couldn’t help but notice that most of his old Traffic chums had come along for the ride: Chris Blackwell, Jim Capaldi, Reebop, Viv Stanshall. If it looked like the last Traffic album on paper, it sounded better on plastic. Island hired the rhythm section of Andy Newmark and Willie Weeks to flesh out Winwood’s keyboards and guitar, and the results were slightly more energized and, on songs like “Midland Maniac” and “Vacant Chair,” momentarily tantalizing. Unfortunately, Winwood’s self-editing skills hadn’t improved with time; even the better songs felt two minutes too long. That Steve Winwood could make an album like this was no surprise. That it would take him three years to make it was, in fact, pretty surprising. No doubt the album was recorded and released to keep Steve Winwood from disappearing into the “Whatever Happened To…?” files, yet the album leaves the question of his future as a solo artist unanswered. John Barleycorn was dead; that was clear enough. But would Steve Winwood’s star rise again? Only time would tell. Three years, to be exact, when he released the platinum-selling Arc of a Diver.