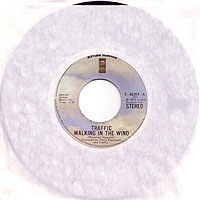 Kronomyth 9.1: DEAD BAND WALKING. This is the band’s last single (not counting the 1994 reunion), again split into two parts. Unlike the band’s previous two-parters, however, this one just cuts that last two minutes of music from the original version and credits it as an instrumental. Seriously, I’d be hard-pressed to name a stingier artist than Steve Winwood where singles are concerned. Jim Capaldi provides some interesting lyrics for this song, although I’ve yet to untangle it all. The liner notes from his debut album, Oh How We Danced (1972), featured a quatrain that spoke of Hate’s words being lost in the wind, so maybe Capaldi is saying that his ability to change the world around him is equally ineffectual. Musically, it’s not one of Winwood’s best ideas, and stands in sore need of a chorus (think “Vacant Chair”). Still, When The Eagle Flies didn’t have an obvious single on it, and even I would have narrowed it down to this or “Something New” since they’re two of the album’s more accessible tracks. Of minor interest, the 7-inch promotional version released in the US featured the full-length version in stereo, with a mono version of the single edit on the flip side.