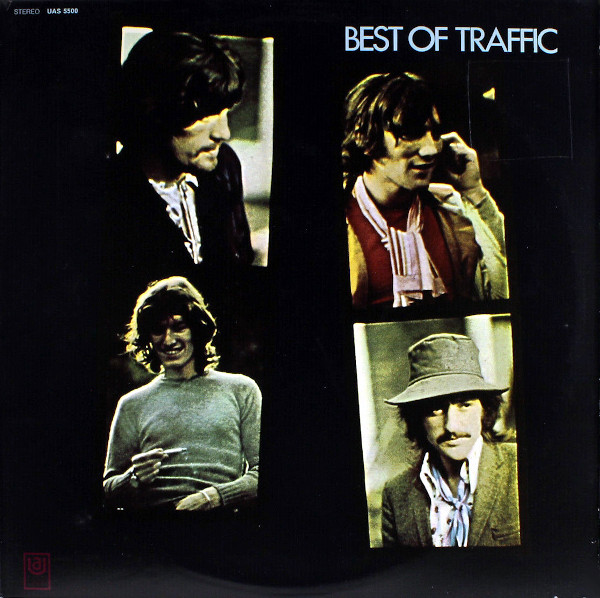 A good compilation of songs from the band’s first smiling phase featuring Dave Mason, including some nonalbum singles.

Released a few months after the odds-and-ends Last Exit, Best of Traffic collects the band’s singles up to and including “Medicated Goo” b/w “Shanghai Noodle Factory.” It’s an excellent summary of the band’s first two years, split neatly into two parts: the psychedelic pop songs (side one) and the prog/folk/rock songs (side two).

Although Traffic abandoned the psychedelic format quickly, the songs they left behind (“You Can All Join In,” “Hole In My Shoe”) had an influence on a lot of artists, from David Bowie to XTC (in their Dukes of Stratosphear phase). Stereo still being a relatively new technology, the stereo mixes presented here might seem clumsy to modern ears, and they do tend to go heavy on the sitars; personally, I prefer the mono mixes of their early songs. On side two, you can hear the Traffic of John Barleycorn and after, with earthier arrangements that allowed Steve Winwood and Chris Wood to stretch out and play their instruments.

In its first incarnation, Traffic produced some of the best psychedelic and early progressive music of the era, but ask someone today to name the great psychedelic bands of the 60s and you’re likely to hear The Beatles, Pink Floyd, The Byrds, Jefferson Airplane, Cream and even The Rolling Stones before you get to Traffic. Best of Traffic sets the record straight, although these days you’ll find it only as an expensive import or in a bin of used elpees. You’ll also find most of these songs on the compilation, Heavy Traffic, released by United Artists in 1975.

Traffic had officially disbanded at this point. Jimmy Miller is still listed as producer, although everything here had been previously released.

Art direction and design by Woody Woodward and Ron Wolin.