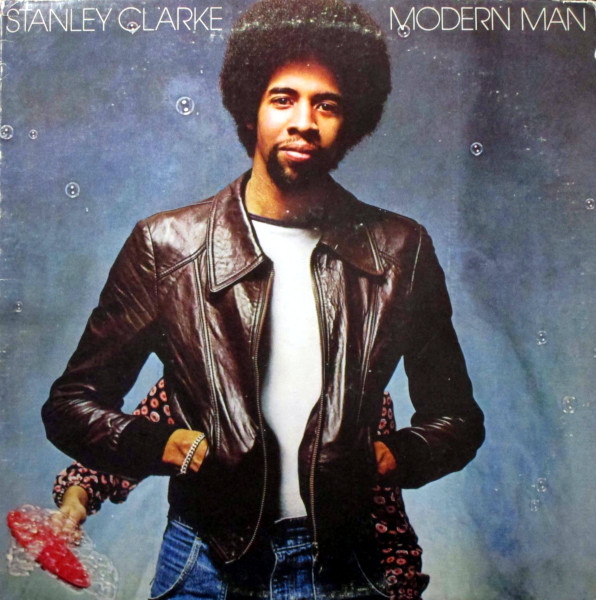 The followup to School Days continues to explore a variety of different styles including rock, funk, fusion and a few songs with vocals.

Your average Scientologist, it would seem, has some pretty strange ideas about both God and what constitutes good science fiction. Modern Man begins with Stanley Clarke’s vision of science-fiction fusion (“Opening/He Lives On”), plus a couple of funk exercises and a handful of tantalizing Interludes. It feels harsh to say that Stanley has dumbed down the formula since his last record; maybe it’s just that he’s singing more. While it’s not the dazzling display of School Days, Modern Man is no slouch. It features a great rock instrumental with Jeff Beck on “Rock ‘N’ Roll Jelly” and pushes some personal conceptual envelopes with its Interludes and opening/closing statements.

Between the spacemen and the synthesizers, Modern Man belongs to an earlier time, but there are a lot of us still living in that past, so maybe you won’t mind at all. The real differences between this album and his last are the amount of singing that Stanley does (a lot, though not poorly) and the difference in styles between Michael Garson (who doesn’t seem to have changed much since his days with David Bowie) and David Sancious. Beginning with Modern Man, Clarke began to evolve from a fusion artist to an R&B/funk artist, although I’m pretty sure “evolve” isn’t the right word. Here, he’s still inhabiting that middle world between jazz and pop/R&B; “He Lives On,” featuring Jeff Baxter on guitar, could pass for a Steely Dan song, and “Got To Find My Own Place” is no more of a sellout than Chick Corea’s songs. Of course, fusion fans may not be so interested in hearing Stanley Clarke sing or play pedestrian funk, while R&B fans probably don’t think of themselves as space warriors.

Modern Man isn’t the tour de force that School Days was, though not for a lack of trying different things. There are definitely some standout tracks here, and the album’s hopping between styles does strangely grow on you over time, so you may want to stay after School to hear what the world’s greatest bass guitarist has to say and play.

All songs written by Stanley Clarke unless noted