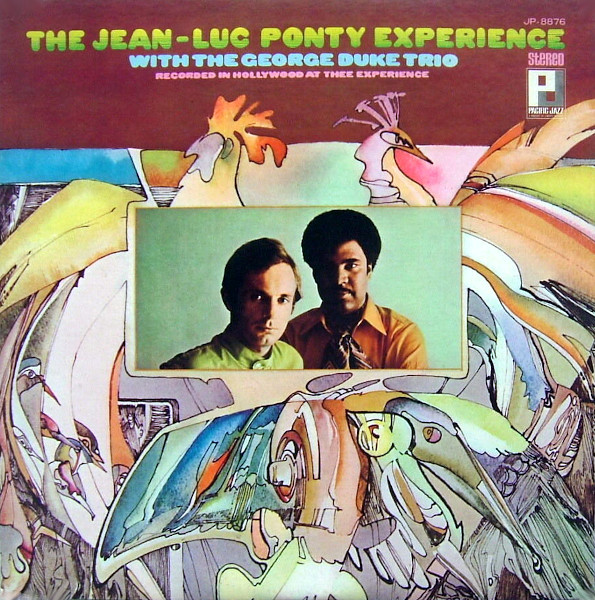 World Pacific Jazz founder Dick Bock had the bright idea to expose Jean-Luc Ponty’s jazz fusion to rock audiences and booked him at the Sunset Strip psychedelic stop, Thee Experience. Too bad that lightbulb didn’t go off before they made the disappointing Electric Connection. Slimmed down to a quartet of Ponty, George Duke (now on electric piano), John Heard and Dick Berk, The Jean-Luc Ponty Experience with The George Duke Trio is an electrifying evening of jazz fusion that served as something of a breakout for both Ponty and Duke.

Ponty’s electric violin is both beautiful and grotesque, a creature of the post-Miles fusion forest where noise and art intertwine, yet it’s a new species, interesting to be sure, but not entirely alien. I think it’s this grotesque beauty that captured Frank Zappa’s imagination. As the first effective example of Ponty’s playing in a jazz/rock fusion setting on his own, The Jean-Luc Ponty Experience should be experienced. As an arranger, Duke is far less rigid than Gerald Wilson, and that freedom allows Ponty’s violin to soar. Their versions of Herbie Hancock’s “Cantaloupe Island” and Wolfgang Dauner’s luminescent “Pamukkale” are highlights. Listening to this concert, you get a sense of the excitement that audiences had when they first heard Ponty some fifty years ago (hard to believe, I know). At first, I wasn’t that enamored of this recording, approaching it as I did from the future, but from the perspective of his previous recordings this is a giant step forward.

Note: This concert was re-packaged overseas as Live In Los Angeles. The French version is a sort of hybrid of the two, prominently featuring the word “Experience” on the album cover.