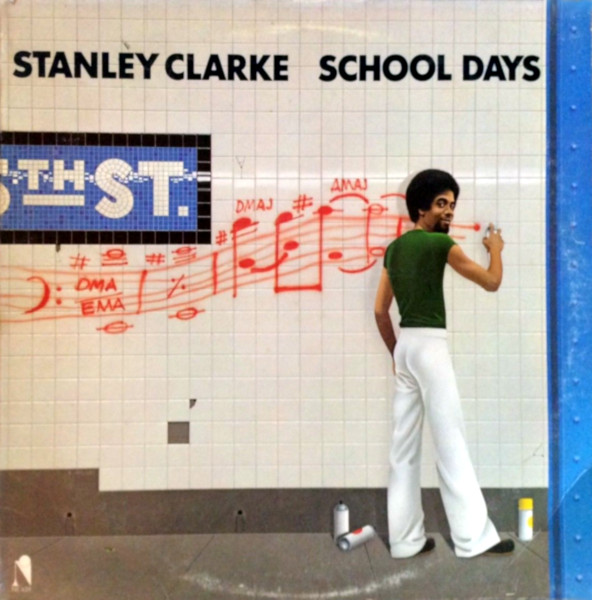 This is a lesson in how musicians should approach making a solo album: mix it up and give 110% on every track.

Kronomyth 4.0: Bass class is in session.

Stanley Clarke went from whiz kid to wizard in five short years. On School Days, he steps out of the shadow of Return To Forever to show us what he’s learned. Suffice to say that fusion fans took note(s). School Days is set up to showcase the many sides of Stanley: fusion, funk, smooth, classical, acoustic, R&B. For progressive fusion fans (i.e., the kind of people who only get jazzed about RTF, Frank Zappa, Brand X, etc.), School Days scores an A+ on the merit of the opening title track alone.

“School Days” is basically six feet of genius crammed into eight minutes of music. I walked away from that song thinking that Clarke had found a way to match the best progressive fusion artists of the day and make it look easy. “Quiet Afternoon” explores the romantic/smooth jazz side of Stanley Clarke, though it’s not as painful as you’d think. “The Dance” follows exotic fusion, “Desert Song” journeys into the arid world of acoustic jazz , “Hot Fun” is a crazy funk song that lives up to its name, and “Life Is Just A Game” brings out all the stops in a big fusion finale, including vocals.

Earlier albums showcased many of the same skills, but were partly weighed down by extended suites and occasionally weak arrangements. School Days is different, as Stanley Clarke scores extra credit with one great number after another. Is it his best record? Well, given what I’ve heard so far, that would be an educated guess.

All compositions composed, arranged and conducted by Stanley Clarke.