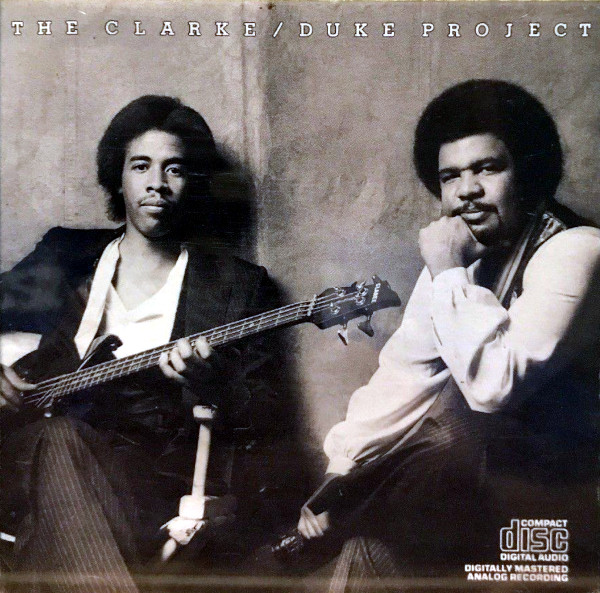 Duke and Clarke join forces to make a disco record, contrary to most projections.

When George Duke and Stanley Clarke signed with Epic to record an album together, the label apparently expected a jazz fusion album. I’m with the labels this time. As a fan of Stanley Clarke’s music (with and without RTF) and Frank Zappa, I was expecting a Journey To Love. Instead, what Epic and the rest of us got was a Top 40 R&B/disco album.

Now, if you’d been paying close attention, you would have heard this kind of music creeping into Stanley Clarke’s records, so the commercial direction of The Clarke/Duke Project can’t be called a complete surprise. But if you’re expecting me to heap praise upon it, I would kindly point you in the direction of a different site, perhaps one called Disco-ography. I listen to Stanley Clarke records to hear him cut loose on the bass, not to sing “I Just Want To Love You.” In the record’s defense, it’s only about half an album of sappy disco music; the other half features smart funk that suggests Was (Not Was) (e.g., “Finding My Way”) and Cameo (e.g., “Let’s Get Started”). As a bonus, you’ll hear what is probably the funkiest version of “Louie Louie” ever recorded.

The pair’s commercial acumen paid off when the album reached the Top 40 (and topped the Jazz charts according to Billboard, the same company that gave us the Hot Black Singles chart) and scored the biggest hit of Duke’s career with “Sweet Baby.” Clarke repeated the exercise on his next album, Let Me Know You, with inferior results, so if you’re interested in his disco phase, The Clarke/Duke Project is probably the best place to start. Or you could just ignore this altogether and go back to listening to “Inca Roads.”