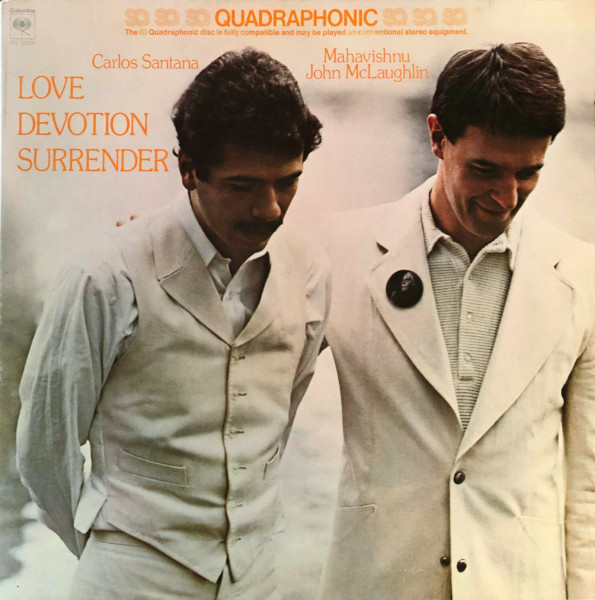 Two of the leading fusion outfits of the day rally around the music of John Coltrane, sort of, in this meeting of two supremely talented guitarists.

Kronomyth 4.0: Love, Devotion and Shut Up And Play Yer Guitar.

Carlos Santana and John McLaughlin had been moving in the same circles for several years, musically (both played with Buddy Miles) and spiritually (both followed the teaching of Sri Chinmoy), so the decision to record an album together wasn’t completely out of the blue. The decision to devote their combined forces to interpretations of the music of John Coltrane (“A Love Supreme,” “Naima”) and Pharoah Sanders (“Let Us Into The House of the Lord”), however, was unexpected. Love Devotion Surrender has earned its share of admirers over the years, and there’s no arguing that some of this material (e.g., “The Life Devine”) is stunning. Whether it’s also guilty of being esoteric and an excuse for endless guitar solos, well, yes, probably that too, but listening to two of the world’s greatest fusion guitarists play off one another is likely better than whatever you already had planned for the next forty minutes.

The album starts with Coltrane’s “A Love Supreme” that swaps the opening horns with a stunning flourish of electric guitars before settling into the song’s familiar groove, anchored by Doug Rauch and punctuated by the confident organ work of Larry Young (currently a member of Tony Williams Lifetime). Much guitar fireworks ensue, with Santana in the left channel and McLaughlin on the right (I can’t speak to where they ended up on the quadrophonic mix). The lovely “Naima” (from Giant Steps) becomes a beautiful acoustic guitar duet, which will surprise no one who tuned in for McLaughlin’s last album, My Goal’s Beyond. The original “The Life Divine” is the real payoff for fusion fans: a McLaughlin original that gives the ad hoc band (an amalgam of Santana and Mahavishnu Orchestra) a chance to flex their muscles.

Side two is comprised mostly of the pair’s fifteen-minute version of “Let Us Into The House of the Lord,” popularized by Sanders but credited as an original arrangement by McLaughlin and Santana. The guitar solos from Santana and McLaughlin are breathtaking, though I’m not really sure how they reconcile the album’s theme of love, devotion and surrender with what on the surface seems like an electric-guitar ego trip. Maybe they should have called it Love, Devotion and Shut Up And Play Yer Guitar. The closing “Meditation” is a short acoustic number with Santana on acoustic guitar and McLaughlin on acoustic piano. It’s a soothing way to end a turbulent album, with both guitarists stepping away from their established personas for a moment.

Like I said, some people really enjoy this album, and the decision by MFSL to add this to their growing library of remasters suggests that better minds than mine have already beknighted it. I can tell you, for what it’s worth, that LDS isn’t an album I return to often, and I wonder if the large figures of Santana, McLaughlin and Coltrane might cast shadows that hide the flaws of such an enterprise (that is, transporting the music of John Coltrane into the realm of electric guitar fusion). Then again, I’m probably just a Grammarly upgrade away from being rendered completely irrelevant anyway, so never mind me and listen to what the machines tell you.