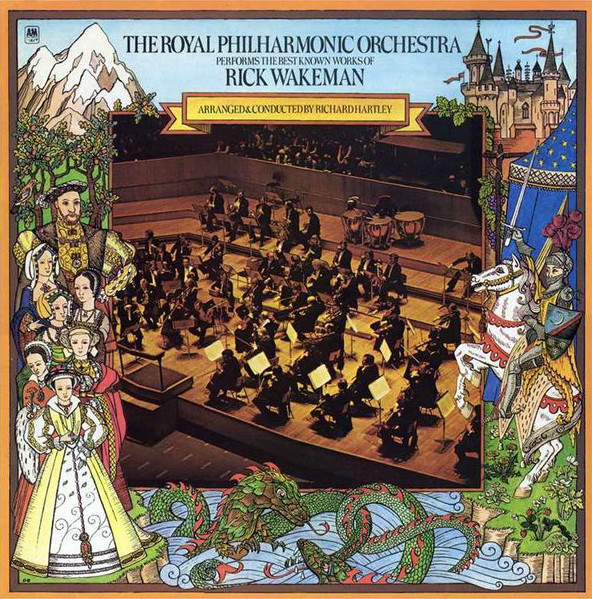 The music of Rick Wakeman performed by The Royal Philharmonic Orchestra without a trace of irony. Phbbtt.

Kronomyth 5.5: A journey to the centre of the orchestra.

As punk was pushing prog to the periphery, A&M courted certain commercial disaster by recording an album of Rick Wakeman’s music, arranged for and recorded by The Royal Philharmonic Orchestra. Released only in the UK, where the Orchestra presumably had a wider audience, the album is both a validation of Wakeman’s musical chops (if such a validation was needed) and an interesting vantage point from which to re-admire works such as Myths and Legends and Six Wives. Personally, I’m not sure the Orchestra adds anything to the original magic of “Katherine Howard” (yes, I know it should be Catherine with a C) or “Anne Boleyn,” but the excerpts from The Myths and Legends of King Arthur do bring out the intrinsic musical merits of the opening suite and “Lady of the Lake” in more detail.

Obviously, this record is intended for a small subset of Wakeman fans and perhaps the more adventurous fans of the RPO. You could argue that arranger/conductor Richard Hartley already had half his homework completed by Wakeman, and that all that was required was some minor re-arranging. This isn’t a case of re-envisioning what Wakeman had originally written, but rather expanding on that vision by arranging the songs for a full orchestra (which, in the case of Journey, was already present). The album’s liner notes also spend a good amount of time highlighting the recording process itself, which broke from typical classical tradition by miking the individual artists and recording the orchestra in separate sections. This gave producer/engineer Robin Cable more flexibility for the final mix, and there is a resulting immediacy in the sounds of the instruments that is rare for classical music. All in all, this is a pleasant side journey through Wakeman’s recent works; far more effective than Symphonic Music of Yes, at any rate.

A1. Orchestral Suite from ‘The Myths and Legends of King Arthur and Knights from the Round Table’ – ‘Arthur’ – ‘Lady of the Lake’ – ‘Merlin the Magician’ – ‘The Last Battle’
A2. The Six Wives of Henry VIII – ‘Katherine Howard’ – ‘Anne Boleyn’
B1. Orchestral Suite from ‘Journey to the Centre of the Earth’ – ‘The Journey’ – ‘Recollection’ – ‘The Battle’ – ‘The Forest’
B2. ‘After the Ball’ (from the album and film ‘White Rock’)

All songs written by Rick Wakeman, arranged by Richard Hartley.