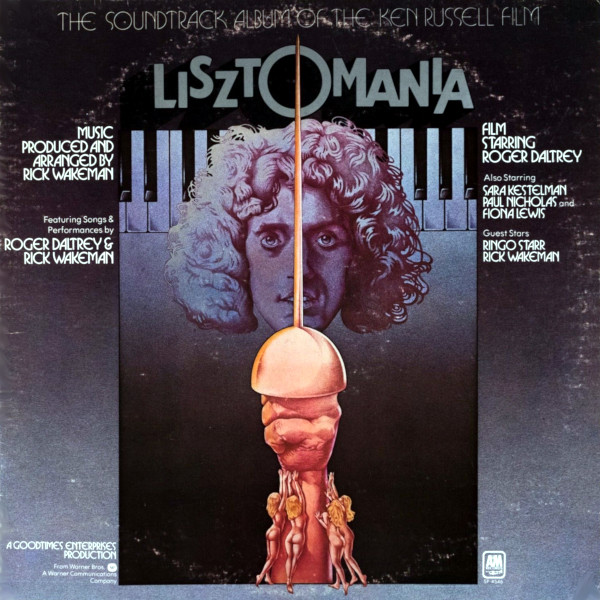 Wakeman scores and (briefly) stars in Ken Russell’s lurid vision of an early rock star. The Liszt you can do is listen.

Ken Russell’s gonzo Lisztomania is a polarizing film; you either love it or you hate it. I thought it was brilliant, but my tastes tend to lean toward the unconventional. The film starred Roger Daltrey and featured a musical score of famous Wagner and Liszt themes adapted and arranged by Rick Wakeman. In a move of inspired economy, Daltrey lends his golden voice to several songs in the film, and Wakeman makes a cameo on screen as a golden warrior.

Both the film and the score are way over the top, but you need to approach them with a sense of humor and adventure. Unfortunately, critics can be a humorless lot sometimes. I think Lisztomania is a work of art, and Wakeman’s score artfully reproduces the grandiose styles of Liszt and Wagner in a contemporary rock setting. Is it as inspired as The Six Wives of Henry VIII? No, it isn’t. But Daltrey is a vast improvement over Ashley Holt, and Wakeman is working with some pretty impressive material here (Liszt, Wagner).

I would rank “Dante Period” with the best of Wakeman’s instrumental bits, and the songs with Daltrey (“Love’s Dream,” “Peace At Last,” “Orpheus Song,” “Funerailles”) are as good as anything that appeared on the generally less maligned McVicar. The other vocal tracks, “Hell” (featuring Linda Lewis) and “Excelsior Song” (Paul Nicholas), are much stranger and intentionally less sentimental, dark where Liszt’s voice (Daltrey) is light, which is by design.

If the film turned you off, then the soundtrack probably isn’t a sound investment. Both are in questionable taste (which most people could deduce from the giant penis on the album cover). Maybe your world already has too many freaks, frankensteins and goosestepping gestapo agents in it already, but mine doesn’t (at Liszt not yet, although I understand the powers that be are working on it).