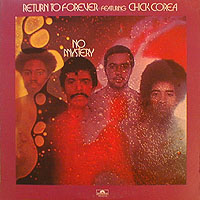 As humor and ignorance go hand in hand, I’ll let the former lead the latter in a little poke at jazz-wise folk… No Mystery plumbs the paradigmatical prog fusion cum Latin jazz that RTF is acronymically known for (noting that in fact it’s not an acronym at all). Paralytic rhythms overtake the funky aspirations of side one, proffered most profusely on Lenny White’s darkly funny “Sofistifunk” and in a suffusion of profusity on the seven-minute “Flight of the Newborn” (with a brief layover in Axesaw and the Keys of Reed). If they don’t get your foot tappin’, try on the metatarsal modalities of Stanley Clarke’s bass on “Dayride” or steeling yourself against the humor of “Excerpt From The First Movement of Heavy Metal.” Oblations to the great funk nation, the first half of No Mystery is a piece of prog fusion history worth preserving. Side two slips into the matador’s suit of My Spanish Heart, a part and yet apart from Mystery’s space spelunking start. The title track is patronymic parlor jazz with a forest scorpion’s sting (having earlier resided underwood in ruth), the two-part “Celebration Suite” a cause for celebration if you enjoyed My Spanish Heart. The seriality of songs is less important than it was on Romantic Warrior, the ability to transhumanize jazz remains as keen. What occurs is a consubtantiation of creative forces, revealing the mysteries of the universe through sound. Ironically, it was L. Ron Hubbard who pointed out that we as human beings let our attention slip out the open window of a large and foreign word, but jazz critics insist on slippin’ ‘em in anyway. No Mystery earned them a Grammy in 1975 for Best Jazz Performance by a Group. Far from vindicating the Grammy selection process, I’ll simply note that even a blind man can pick the right nutshell in an honest game every third time.