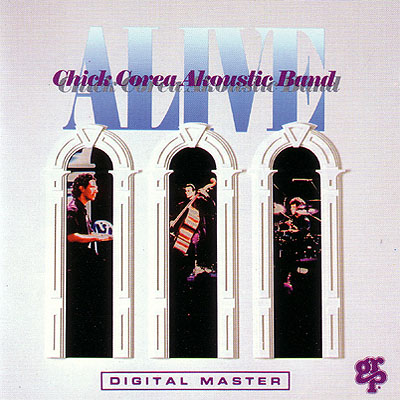 Now that the Akoustic (nee Elektric) Band had netted their own Grammy, what to do but take their newfound fame on the road. Alive features more of the same: jazz oldies rendered by a cross-generational trio intent on venerating and vexating the classics simultaneously. As I pointed out in an earlier review for AMG, this approach can be divisive for music listeners. In fact, even the trio seems divided on what they wanted to achieve. In most cases, Corea opens the tune with a thoughtful exposition of the theme, only to have Dave Weckl and John Patitucci come in and noisily upend it. (The experience is not unlike watching puppies at play and lamenting the once-loved, now-chewed objects left in their wake.) Obviously, a lot of people enjoyed this approach; they don’t just give Grammys away, although it seems like that sometimes. But the distance between Corea’s reverence and Weckl’s irreverence is too great a chasm for me to cross comfortably. When Corea is willing to enter to fray, as on the closing “Morning Sprite” (one of two CC originals on here), the trio can really tear things up in a good way. The Elektric albums clearly showed that Corea was able to keep pace as an innovator, but I suspect he’s something of a romantic at heart, and he wears it on his sleeve here, while Weckl and Patitucci might as well be wearing warpaint. Again, you may feel differently, “a new chassis for old classics” and all that, particularly if you enjoyed their earlier Akoustic expedition. The digital recording is exceptionally clean (a GRP hallmark) and the audience intrusion is minimal, so it feels more like a studio album most of the time and thus serves as a fitting bookend to the first Akoustic recording.