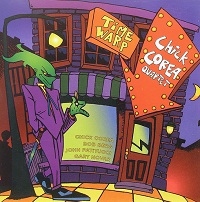 Kronomyth 54.0: STORY TIME. In an act of mercy that must have been guided by the benevolent hands of angels, someone absconded with the liner notes to the library’s copy of Time Warp, which meant that I was spared from reading yet another nonsensical plotline that no doubt involved aliens, unicorns and telepathic flowers. You, on the other hand, with your jaunty ways, will be spared nothing, but subjected to an even more convoluted story of my own devising, for I am a mean and spiteful creature with no regard for the suffering of my fellow man… Chapter the First: Whirled Over. Two comical butterflies are dancing in the breeze when suddenly a giant owl swoops down to eat them because there is nothing comical about butterflies. Nothing. Chapter the Second: Lieutenant Warp. A Star Trek fan and a Star Wars fan are debating whether a photon beam is stronger than a light saber when a giant owl swoops out of the sky and eats them both. Because giant owls have to eat like 10X their weight every day or something like that. Chapter the Third: Wishful Tinkling. Water nymphs made up of millions of raindrops sail down an emerald river in a canoe they’ve fashioned from the husked-out carcass of a giant owl. A storm of saxophones ensues, blowing them off course into the Great Thorned Desert. Chapter the Fourth: The Great Thorned Desert (Which You Were Kind of Expecting, Weren’t You?). The water nymphs travel over the rough, difficult terrain by foot, over sand and thorns that protrude everywhere from the ground, dragging the giant owl husk behind them and using it as a shelter in the cold evenings. At night, the nymphs dream of the lesser water god Arndok, who tells them that his body is buried under a ruby thorn in the center of the desert. Chapter the Fifth: Larry the Lava God. Deep in the desert, Larry the Lava God guards the ruby thorn. He dances around the thorn, and his dance attracts the water nymphs, who join him, their bodies creating clouds of steam when they touch. They dance to a fanciful ruby rhumba, and the footsteps awaken the sleeping body of Arndok, who emerges from the ground and dances with them. Arndok has one leg as small as a twig and another as big as a tree trunk, which makes a loud thumping sound when it hits the ground. Together, all four of them pile into the owl canoe and sail into the stars on the moonsea, where they witness a battle between the blue dwarves and the red giants. Chapter the Sixth: Owl’s Well That Ends Well. Two butterflies are dancing in a dawn breeze, and we’re left to ponder: Was it all a dream? Did the Water Nymphs really ever exist? Would it matter if Chick Corea wrote an album based on the ingredients from a jar of pickles at this stage? The answer to all of these questions, of course, is buttons. If that wasn’t the satisfying answer you were looking for, be it known that this is actually a very good disk of post-bop jazz (quality-wise on a par with Paint The World), and hearing Bob Berg blow with Chick, Gary and Patches is a hoot.