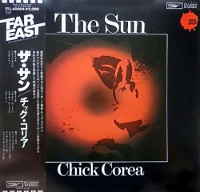 A 1970 session featuring sixty-seven percent of the Miles Davis sextet, which finally saw the light of day in 1978.

These are the midnight perambulations of the extant Miles sextet (minus Moreira and Miles himself), congregated in some eternal kitchen of the soul where scraps of meat and melody are served to the insatiable jazzeaters who would have a bronze cast of Miles’ every footfall. Originally recorded in September 1970 (and purists will point out that Steve Grossman was technically out by then), the music on The Sun didn’t see the light of day for years, and only then appropriately in the land of the rising sun. It is, like much of the Miles Davis marginalia, worthy of time and note.

You could see this as a semi-Circle: a quartet of bass, drums, piano and sax with Chick Corea, Dave Holland and the brilliant Jack DeJohnette at the core. The songs fit squarely into Corea’s avant-garde phase: dissonant with a very tactile and percussive quality that includes scratching, groaning and quick staccato clusters of keys jumbled together. Solos devolve (evolve?) into an orgy of frenetic notes, structure and chaos play an endless game of tug of war, and throughout you’ll find the occasional moments of calm that pierce through the stormclouds of fierce invention and remind you of the potency of melody.

Now, nothing on The Sun could be called timeless music. Corea fans have likely had their fill of this stuff already; Grossman’s fans may be more inclined to make the effort, since he shines on this recording. It appears from the liner notes that a few guests (including Dave Liebman on some bagpipe-like instrument called the musette) joined the fun on the last three tracks, although their contributions are barely audible.