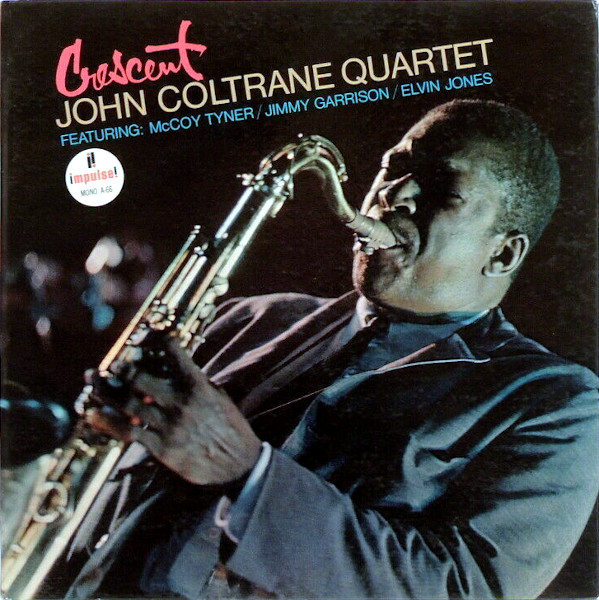 Another Coltrane record that I’m over the moon for, featuring five originals.

The danger in my making any pronouncement about a particular John Coltrane album is my passing familiarity with the vast body of his work. I’ve heard perhaps a dozen albums, read the glowing praise of pundits with cold disinterest and have divided his records into two camps of marvelous and meh. Crescent belongs to the former and would currently make my shortlist of quintessential Coltrane. Chronologically, it’s smack in the middle of his classic period, flanked by one of the great quartets from the twentieth century: McCoy Tyner, Jimmy Garrison, Elvin Jones. If you were going to introduce someone to the work of Coltrane, it would be in their company.

From the opening moments of “Crescent,” we’re introduced to Coltrane the creator, whose musical vistas spread unhurried like dawn over a dark landscape. There is something supremely confident and natural in the way that Coltrane and the quartet can turn over a melody and slowly admire every facet, then play with it like a cat with a mouse. For the first half of the record, Coltrane is the master mouser, unleashing diabolical solos, resting in thoughtful repose and channeling his fury anew. On the last two songs, Coltrane steps back to let his band have the spotlight; Tyner steps out of the way entirely on “The Drum Thing,” leaving Coltrane, Garrison and Jones to smolder like some exotic censer.

The contributions of the quartet here are significant: Tyner’s masterful strokes of color, Garrison’s eastern-inflected bass, Jones’ subtle but strong rhythms. They’re the perfect complement to Coltrane’s unhurried and uninhibited muse, shedding light on the lush green of lovely melodies or receding while the stormclouds of his genius raged. Really, the whole record is perfection, which I realize is what most people say about most Coltrane records, but most of the time I don’t agree with them. This time, however, the quartet has painted a masterpiece.

All compositions by John Coltrane.