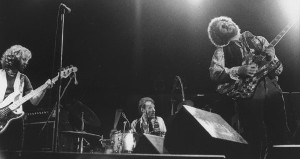 After the airforce, Ginger Baker joined the army. Specifically, Three Man Army. Some hard rock ensued, but nothing to make you forget Cream.

I suppose it was only a matter of time before the Army and the Airforce joined forces to fight the good fight. The Baker Gurvitz Army is, as its name suggests, an amalgam of brothers Adrian and Paul Gurvitz (two-thirds of Three Man Army) and the enigmatic Mr. Baker on drums and occasional vocals. Though you could argue that the band was influenced by Cream (really, who wasn’t?), their sound landed them closer to Uriah Heep: hard rock with delusions of grandeur (although you can count me among the deluded). Baker’s mercurial impermanence being what it is, the ticking timebomb in the room, it was only a matter of time before the Baker Gurvitz Army imploded. Before the ink on their alliance was dry, the whirling Gurvitzes had jumped ship (mixing my military metaphors) to join the Graeme Edge Band for two albums, Kick Off Your Muddy Boots (1975) and Paradise Ballroom (1977).