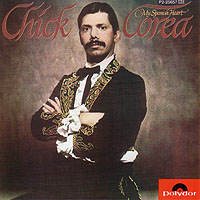 Quintessential Corea, My Spanish Heart displays the duality of the man and his music: the Romantic classicist on one hand, the mad Moogician on the other. Though born in New England, the Latin music of Corea’s home has followed him throughout his career. On My Spanish Heart, we follow Corea as he paints the brilliant nightsky, sheltered gardens, proud hilltops and street festivals of a Spain remembered. Featuring only a handful of carefully chosen collaborators, these songs become a showcase for Corea’s articulate playing garnished with graceful flourishes, a style that draws comparison to past Romantic composers Franz Liszt and Frederic Chopin. (Incidentally, I don’t invoke these titans of the tinkling ivory lightly; to my mind, Corea earns their esteemed company on this outing.) Of the songs and cycles featured here, “Armando’s Rhumba” deserves first mention. It is one of the few Corea originals to become a classic in his lifetime. Joined by violinist Jean-Luc Ponty, the pair blend their sympathetic styles into a timeless celebration of sound. Also notable is Corea’s transposing of the flamenco for keyboards, exhibited in “Day Danse” and the opening of the four-part “Spanish Fantasy.” These pieces, and to a large extent the entire effort, are forcibly stamped with a Spanish mood. Not that you wouldn’t find the same themes at work on many Corea albums; the airy vocals of Gayle Moran on “Love Castle” or the intellectual pursuits of “Day Danse” and sections of “Spanish Fantasy” are hybrids that Corea has revisited many times over his career. What separates My Spanish Heart from the horde of also-rans is the consistent twisting of the diamond to illuminate a different and yet related facet of Corea’s Spanish fancy. Throwing the listener in the midst of the party on “Night Streets,” then painting a peaceful scene with Stanley Clarke on “The Hilltops,” keeps the audience attuned to the great variety of sounds that Spain can evoke. And Corea even finds occasion to deflate his own balloon for the humorous grotesques of “El Bozo.” At once refined and passionate, My Spanish Heart gets to the heart of Chick Corea’s appeal like no other album I own from him.

All music composed and arranged by Chick Corea.
* Does not appear on original compact disc versions because of time limitations.