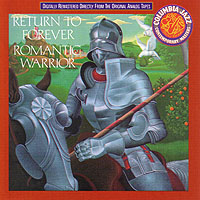 Let me share with you my secret paramour in the field of fusion: Romantic Warrior. Loosely based on a medieval theme, this is the final installment in a very fruitful collaboration between Chick Corea, Stanley Clarke, Al DiMeola and Lenny White. Each of the four contributes at least one track to the proceedings, with the ever-fertile imagination of Corea assuming the lion’s share at three compositions. Opening up the songwriting leads to the kind of variegated musical vision most often encountered with Weather Report, only better. Heresy, you say? Not having heard this record, you might think that. But listening to Romantic Warrior will lead to a change of heart. As much as fusion bleeds into the progressive landscape, it rarely takes root. This time is different, as RTF blends the two on tracks like “Medieval Overture” (casting the silhouette of no less a titan than Gentle Giant) and “Majestic Dance” (Frank Zappa this time). As happens with most composers, Chick tends to fall into idiosyncratic tendencies. The two-part “Duel of the Jester and the Tyrant,” for example, could just as easily have turned up on My Spanish Heart (where “El Bozo” can claim some kinship with the Jester). But there it would have lacked the grace, the sinew, the inventiveness that the rest of RTF brings to the table. The band doesn’t simply explore progressive rock sounds, they embrace them. That opens the discussion to include wider implications than composition; instead of cramming as many little black notes onto the paper as they can, RTF seems to understand that melody isn’t the enemy. The music that follows is complex but accessible, Protean while serving an aggregate good, sliding between fusion and prog as though it belonged to both worlds. And so you can have a sultry “Sorceress” painted from Lenny White’s perspective, “The Romantic Warrior” ambling on stilts of semi-classical structure, and “The Magician” steeped in mystery as exhibits in the same supernatural gallery. Prog rock fans who fancy themselves amenable to fusion (e.g., anyone with albums by Soft Machine, Bruford, and Brand X in their collection) would do well to take up the standard of Romantic Warrior. The 1990 digital remaster from Columbia/Legacy sounds excellent and features illuminating liner notes from John Swenson.