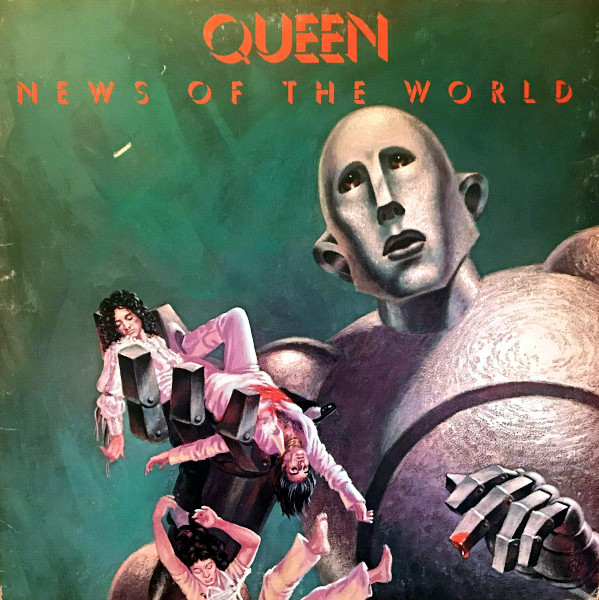 Have you heard the News? Queen has returned and they want their crown back.

I tend to hear this album and Who Are You as rock royalty’s response to the young, punk upstarts. (I am not the first person to make this observation.) Clearly, the ruling class of rock didn’t intend to disappear quietly into the shadows. Freddie and the boys come out with guns a-blazing on the opening pair and continue to get their punches in over the course of their sixth album. The arrival of The Sex Pistols? Darling, Freddie had unsheathed that years ago!

The difference between News of the World and A Day at the Races is stunning. On their last album, Queen sounded like yesterday’s news with their mock operas (“Teo Torriatte”) and gentrified posing (“The Millionaire Waltz,” “Good Old Fashioned Lover Boy”). Compare that to the blitzkrieg opening of We Will Rock You / We Are the Champions. In the span of five minutes, Queen had answered every critic, neutralized every threat and regained their crown. No Pete Townshend soul-searching here.

The rest of News of the World returns to the winning formula of A Night at the Opera. There are the ravers from Roger Taylor (which can hold their own with anything from Cheap Trick), a pair of tuneful and sentimental songs from John Deacon (Spread Your Wings is one of his best), a (sort of) return to “’39” on All Dead, All Dead, and an epic rocker in It’s Late. That last track should have been the final word, but Freddie insists on vamping it up one last time on My Melancholy Blues. It’s a strange ending, a parting kiss after the final blow, but you have to admire the band exiting one of their best albums on their own terms.

Together with A Night at the Opera, News of the World is Queen at their most majestic. Yet it also marks a shift toward rhythmic and heavily sexualized music, as heard on “We Will Rock You” and Get Down, Make Love. There’s nothing baroque about those tracks. To me, this approach (which would re-appear on “Another One Bites the Dust,” “Body Language,” etc.) was a bit banal for the architects of “Bohemian Rhapsody,” but it was fresh enough at the time to be interesting, even exciting. Whatever its minor sins, News of the World made it clear to the world that no one had the bollocks to beat Queen at their own game.

Original 8-track version
A1. We Will Rock You
A2. We Are the Champions
A3. Spread Your Wings
B1. Sheer Heart Attack
B2. All Dead, All Dead
B3. Fight From the Inside
C1. Get Down, Make Love
C2. Sleeping on the Sidewalk
C3. Who Needs You
D1. It’s Late
D2. My Melancholy Blues