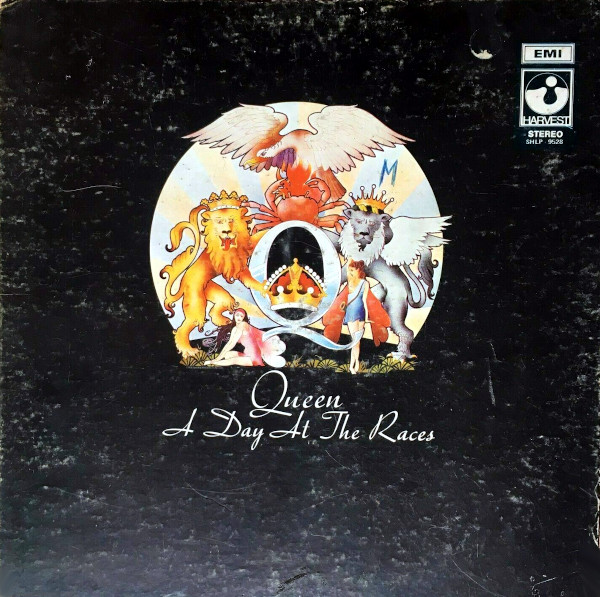 Presented as a bookend to the masterful Opera, this is just a slight notch below in terms of quality and power.

Kronomyth 5.0: A horse of more or less the same color.

A Day at the Races was contrived as a bookend to A Night at the Opera, which has historically been its undoing. Compared to “Bohemian Rhapsody,” even Race’s best song, Somebody to Love, was found wanting. That few songs could hold a candle to “Somebody to Love” was lost in the comparison, as though an endless supply of brilliant songs from Queen was simply presumed. And, really, you’d have to be a jaded prat not to appreciate that A Day at the Races is the work of a brilliant band.

Produced by the band, Queen’s fifth album plays the card of high camp at a time when punk music was rejecting everything that Queen represented. News of the World silenced their critics soon enough, but A Day at the Races lent credence to the (misguided) criticism that Queen was a part of the old guard. Certainly, Sex Pistols’ “God Save the Queen” and Teo Torriate are from very different worlds. But which world would you rather live in?

The one criticism that A Day at the Races hasn’t been able to escape is the fact that it feels like an inferior copy of A Night at the Opera. Choosing an identical design and title for both albums was, in retrospect, a risky move. Audiences naturally compared the two, and there was only the one conclusion that could be made. But the suggestion that Queen had run out of ideas was ridiculous. You Take My Breath Away, Good Old-Fashioned Lover Boy and The Millionaire Waltz, while hardly modish, are inspired creations. Drowse, You and I and Long Away may not eclipse the achievements of “I’m in Love with My Car,” “You’re My Best Friend” and “’39,” but they’re clearly the product of the same minds.

Perhaps Roy Thomas Baker reined them in more. The band’s first self-produced album, however, sounds remarkably good, especially in the remastered Deluxe Edition. The ending of “You Take My Breath Away,” for example, is literally breathtaking. For a band that made stylistic leaps between albums, A Day at the Races may be a case of a band resting on their laurels but, if so, it was more a case of resting at the mountaintop to admire the view—and you’d have to be blind not to see this as a band at the peak of their abilities.