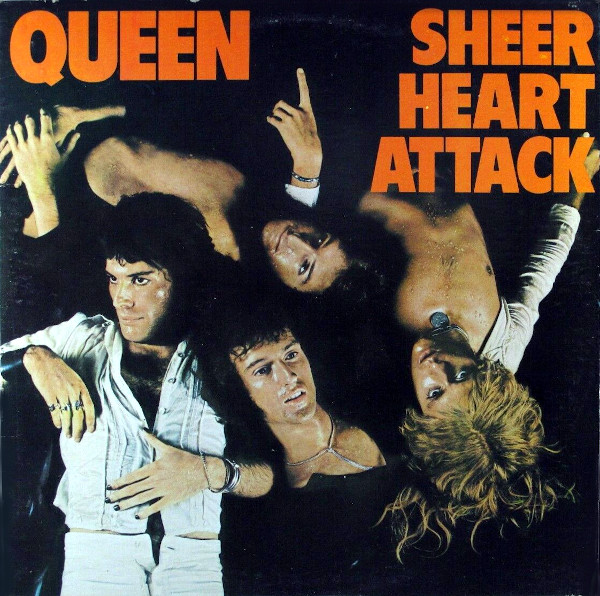 The band’s third contains one killer track and a wild volley of hits and misses.

Kronomyth 3.0: From here to eternity.

It starts with a carnival, it ends with an explosion. In between those two extremes, Queen’s third album features one extremely good song, Killer Queen, and a dizzying succession of ambitious numbers that range from high camp to hard rock. Sheer Heart Attack is a culmination of Queen’s prog fantasies, even continuing the thread of its own self-referential fantasy world with a return to the seven seas of Rhye (Lily of the Valley). As the last of the band’s overtly proggy albums, it is the pinnacle of their early trilogy, with the caveat that A Night at the Opera eclipsed everything.

The album makes an unusual misstep early on upon Brighton Rock. Freddie Mercury’s voice is too high, the song seems to be on the wrong speed and, before you can get your sea legs under you, Brian May releases a three-minute (or so it seems) tempest of guitar. All is forgiven on the next track, “Killer Queen,” which is flawless in creation and execution. There are very few songs that I would consider perfect, and this is one of them. (“Bohemian Rhapsody” would be another.) Roger Taylor’s Tenement Funster! features his typically compressed style and, together with May’s “Ronsonian” guitar, reveals the continued influence of David Bowie in their music. Flick of the Wrist and “Lily of the Valley” form a mini-medley from Mercury that continues the proggish adventures of the black queen, and May closes things out with an awesome and refreshingly succinct rocker, Now I’m Here.

Side two begins, like side one, with an overblown prog piece, In the Lap of the Gods. Again, it seems as if it was recorded at the wrong speed. The band kicks in a standard rocker, Stone Cold Crazy, that sounds like Aerosmith (a group I’ve always associated with Queen), a pretty acoustic song from Brian (Dear Friends) and John Deacon’s first contribution to the band’s canon, the reggae-tinged Misfire. Freddie channels Hoagy Carmichael for the old tymie jazz of Bring Back That Leroy Brown, May’s turn at the main microphone includes a giant acoustic guitar for She Makes Me (which wouldn’t have felt entirely out of place on a concept album by The Who) and Mercury closes the curtain with a much-improved return to the lap of the gods.

Sheer Heart Attack is exhilarating for the sheer variety of music on it. From this point forward, Queen divided its kingdom among four very distinct songwriters, with May and Mercury lording over the proceedings in various measure. Is it an ostensibly better record than Queen II? Well, with the exception of “Killer Queen,” probably not. Both albums are ambitious, proggish and more than a little pretentious, but you don’t create spectacular music without first creating a spectacle.

Composed, arranged and performed exclusively by Queen.
*Listed as “Brighten Rock” on the US record label.

Original 8-track version
A1. Brighton Rock
A2. Killer Queen
A3. Lily of the Valley
B1. Now I’m Here
B2. She Makes Me (Stormtrooper in Stilettoes)
B3. Dear Friends
C1. In the Lap of the Gods
C2. Stone Cold Crazy
C3. Misfire
C4. Bring Back That Leroy Brown
D1. Tenement Funster!
D2. Flick of the Wrist
D3. In the Lap of the Gods… Revisited