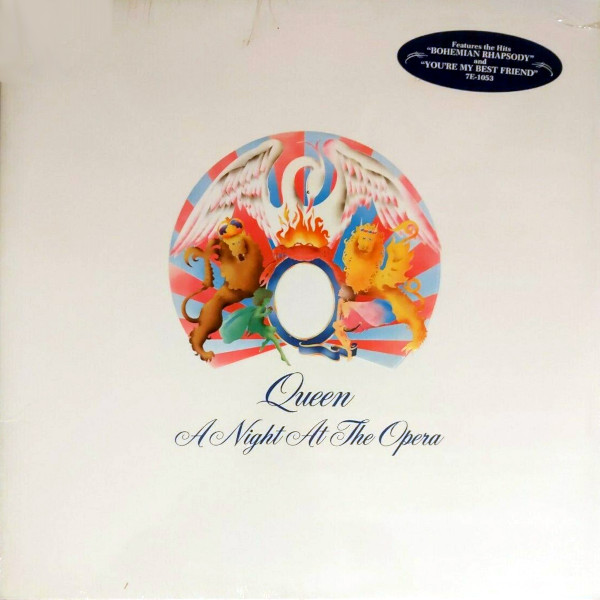 The royal flush of rock and roll albums, revealed card by card with unconfined joy.

The story of King Midas is beloved by children because it presupposes that anything is possible and everything has consequences. I mention this because A Night at the Opera is Midas touched. The band’s last album, Sheer Heart Attack, tried unsuccessfully to blend rock, music hall, prog and four songwriters into a cohesive whole. Queen turns everything it touches into gold on Opera, with the consequence that everything before and after seemed a bit cruder by comparison.

The last time I felt this way about an album was Sgt. Pepper’s Lonely Hearts Club, and that’s not accidental. I believe that Queen had The Beatles in mind when they began cultivating four unique musical personalities in the band and gleefully moved between music hall and rock & roll, all while pushing production values to the maximum. Compare “With a Little from My Friends” to “You’re My Best Friend,” or “When I’m Sixty-Four” to “Lazing on a Sunday Afternoon.”

Beginning with Death on Two Legs, one of the nastiest songs ever written, Queen’s Opera is breathtaking. The first track is a deliberate slap in the face, followed immediately by the carefree “Lazing on a Sunday Afternoon” (a deliberate throwback to the Kinks and Herman’s Hermits) and the auto-erotic overdrive rock of Roger Taylor’s I’m in Love with My Car. The album’s pacing is deliberate; Queen is laying out a royal flush, card by card, and relishing the reveal. John Deacon is up next and delivers a perfect pop song (sung by Freddie) with “You’re My Best Friend.” Brian May finally appears and proves worth the wait with what may be greatest science-fiction folk song ever written, ’39. And just when you’re about to say that May should whip out that acoustic guitar more often, he blows you away with a biting electric guitar riff on Sweet Lady. Side one washes up on the delightful shores of Seaside Rendezvous and some of the mouth trumpeting this side of “You’re Sixteen.” You’ll be convinced this is the most glorious side of plastic ever pressed. That is, until you flip the record over.

The Prophet’s Song answers for all time the nagging question of whether Queen was really a progressive rock band. (The answer is a resounding “yes” from the heavens.) In fact, I’d rank this among the greatest prog songs, ever. The multitracked vocals are just mindbending, making “Now I’m Here” look positively amateurish. It’s hard to believe that Love of My Life came from the same mind and mouth as “Death on Two Legs,” so different are the two. Good Company is May’s teatime romp, and its breezy performance leaves you completely unprepared for what is, surely, one of the greatest songs ever recorded, Bohemian Rhapsody. The operatic vocals and subject matter are larger than life; if any music could be called heroic, surely it was here. What could possibly follow but a triumphant curtain call? God Save the Queen indeed.

Rolling Stone ranked this #231 on its list of all-time greatest albums, which merely serves to point out the folly of such lists. When this record is playing, it is the only album that matters. It is the pure embodiment of rock & roll (and pop) perfection, Sgt. Pepper risen to full captaincy, an heroic adventure that grows more amazing with each retelling. Perhaps Groucho said it best: “And now, on with the opera. Let joy be unconfined.”