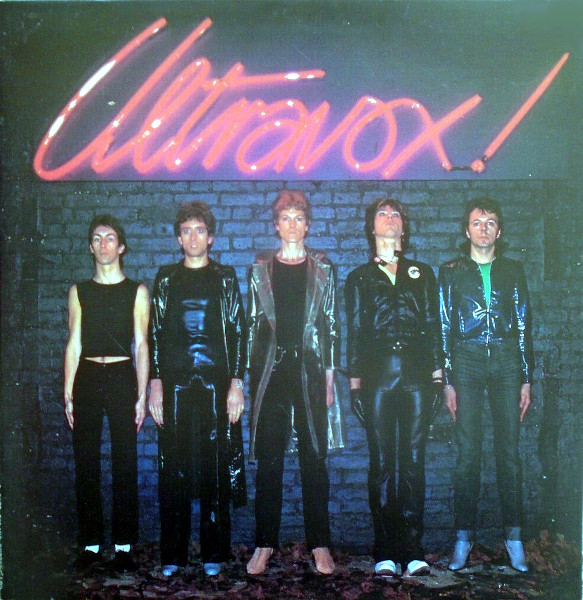 All the best new wave bands, it seems, began as punks, and Ultravox! certainly fit that description at first. The eponymous Ultravox! was a nu-rock revelation: Roxy Music meets the New York Dolls in mid-collision of a suicide pact with a love letter to Kraftwerk tucked in their shirt pocket. Despite their influences, the band is definitely on their own trip. Any album that starts with a punk-rock anthem like Satday Night in the City of the Dead and ends with the unearthly synthesizers of My Sex is bound to hit some interesting stops along the way.

Ultravox, for me, was a case of love at first sight, but that first time was Vienna and not Ultravox! I immediately had to have more Ultravox after Vienna and, being a big Brian Eno fan at the time, snatched up their first album. Instead of deepening my affection for Ultravox, hearing their first album was like discovering an entirely new band that I now loved. “Satday Night,” “My Sex,” Slip Away, Wide Boys and The Wild, the Beautiful and the Damned were frequent companions during my first year of college. As for Vienna, it turns out I had left that elpee at home.

Although it didn’t get the attention of Devo’s first album, Ultravox! is almost as revolutionary and worthy of its own alternative rock altar. The first side of music is stunning, ending with the epic I Want to Be a Machine, a kind of bogus mandroid. The second side is a bit inconsistent (the decision to choose Dangerous Rhythm as the single still boggles my mind), but when it’s good it’s very good. “The Wild, the Beautiful and the Damned” and “Satday Night in the City of the Dead” should have become the kind of classics that are lovingly covered by the next generation of revolutionaries.

A lot of the success of Ultravox! depends upon John Foxx. Eno’s influence is really only felt on a few songs (most notably on “My Sex”). As for Steve Lillywhite, his role seems to have been in balancing the sounds from five strong musical personalities. One of my issues with Vienna and after was the muted accompaniment from Warren, Chris Cross and Billy Currie, but no such complaints here. The three (plus guitarist Stevie Shears) are captured in all their glorious animal energy, from Cann’s superlative drumming to Currie’s piercing violin. If Foxx is the lightning rod, the rest of the band provides the electricity.

Some bands got better when they gave up punk (The Cure, XTC), others got worse (The Damned, Devo). Ultravox is one of the few bands that made the transition without subtraction or addition. John Foxx Ultravox and Midge Ure Ultravox are equally great for different reasons. Not quite glams or punks, the original Ultravox! was delightfully unpleasant in their foxy adolescence.