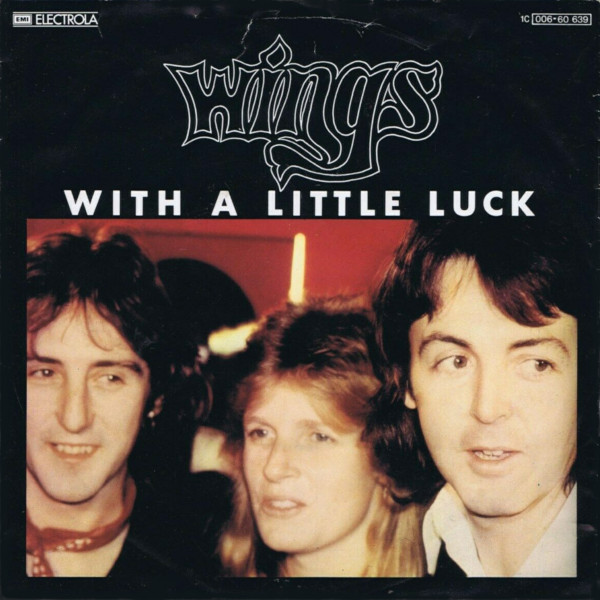 With songs like this, who needs luck? McCartney scored another number one hit with this low-key, high-production gem.

There’s only a small window in life when music really matters; when you wait for the next single from a favorite artist with an anticipation that borders on addiction. For me, that window opened in the second half of the seventies, and the artists were Paul McCartney and David Bowie. “Silly Love Songs” and “Let ‘Em In” were everything I could have wished for, so I waited for the next revelation. And waited. And waited still while English audiences supped on “Mull of Kintyre,” but it wasn’t until the release of “With A Little Luck” that fortune smiled again.

Recorded as a trio, the song was the first I had heard from Paul to prominently feature synthesizers. It was understated, muted almost, yet the quality of craftsmanship was undeniably McCartney. Rarely were six minutes so sweetly savored as when I was listening to “With A Little Luck.” The radio stations favored an edited three-minute version, but for those of us who snatched up the single with an urgency driven by near starvation, it was six minutes of magic.

Like “Silly Love Songs” before it, not a note seemed out of place. Whether McCartney was influenced by bands like Alan Parsons Project or 10cc, “With A Little Luck” was painstakingly arranged and ordered using state-of-the-art synthesizers and production techniques. It seemed to exist in its own time and space, like “I’m Not In Love,” unrushed in hushed perfection. The flip side features the opposite side of McCartney’s muse, the tuneful throwaway, in this case “Backwards Traveller,” here presented as a medley with the Oriental-styled synthesizer noodlings of “Cuff Link” (a style McCartney would revisit on “Frozen Jap” from McCartney II).

The arrival of “With A Little Luck” re-affirmed that Paul McCartney was the reigning king of the pop song, a point that needed making after two years. In the interim, a triple-live album, a couple of pseudonymous recordings and the dull “Mull of Kintyre” were all signs of an artistic lull. But lady Luck and, later, “Londontown,” revealed that Paul McCartney was still the man to beat. It’s reassuring to know as you put your pants on in the morning that the sun will still shine, good will (ultimately) triumph over evil and that The Beatles (in one form or another) will still be making great music.