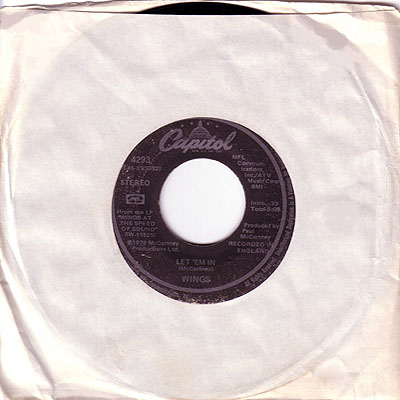 Wings nearly topped the charts a second time with this magical, understated single that namechecks some familiar folk.

Kronomyth 7.2: The Doors of Perception.

It’s funny, the amount of speculation that people will entertain in decoding The Beatles’ “mysteries.” Case in point, the names that Paul McCartney mentions on “Let ‘Em In.” Some are obvious: Brother Michael is, of course, his brother Peter Michael McCartney (who recorded as Mike McGear). Auntie Jin is likely Paul’s Aunt Jane. Sister Suzie might well be Linda, who adopted the name for the pseudonymous Suzy and the Red Stripes recording the following year. Uncle Ernie might be Keith Moon, as some have advanced, or Ringo Starr, who sang the role of Uncle Ernie in the London Symphony Orchestra production of Tommy. Brother John is likely John Lennon. Martin Luther might be a reference to George Harrison, although that’s a bit of a stretch. Phil and Don are obviously The Everlys.

If you tally up all three Beatles in the song, “Let ‘Em In” could be seen as McCartney opening the door to a possible reunion. Unlikely, but it makes for a pleasant daydream. I’m not encouraging you to entertain the notion. Too much time is spent trying to find hidden meaning in music, and what I like most about discussing music is that it need not get any deeper than the simple joy that music brings. Sharing your opinion on religion, politics, ethics, etc. is a dangerous and divisive thing in my, er, opinion. If you’re dividing people in a music review, you’re doing it wrong. Honestly, every argument is a jello-wrestling match of wills; there are no winners, just a few moments of entertainment and a mess to clean up after.

The B side is “Beware My Love” from the same album, Wings at the Speed of Sound. A good amount of ink has been wasted on championing this track, with same even crowning it as the album’s highlight. I’ll admit, it’s wonderful to hear Paul McCartney sing with raw passion again, but I don’t hear where this is an appreciably better song than, say, “Spirits of Ancient Egypt” (which was sung by Denny, I know). Just to stir the pot of jello, you know. Of minor interest, a promotional version of this single featured an edited version of “Let ‘Em In,” the nerve.