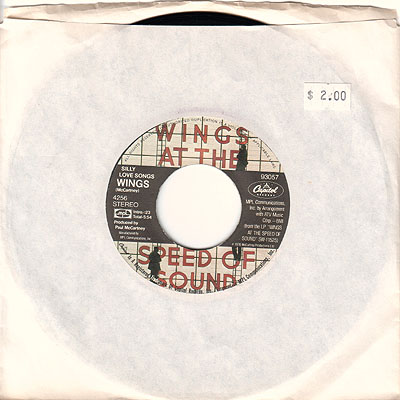 Kronomyth 7.1: In case you weren’t listening to what the man had to say the first time.

Such is the state of man’s misunderstanding, that “Silly Love Songs” has become Paul McCartney’s “Imagine”—the song most likely to commemorate his passing (though “Let It Be” and “Yesterday” will invariably be trotted out as well). As much as the song champions simplicity, this is masterful pop music with a lot of good ideas in it, some of which appear to have been borrowed from his last big hit, “Listen To What The Man Said.” John Lennon, by comparison, seemed to earn the muse’s favor by hard-won inches. Thus many attributed Paul’s graceful leaps as the beneficiary of lower hurdles.

He was (and remains), simply, a consummate songwriter. Of course he took advantage of his gifts to toss off half-baked goodies like “Cook of the House,” which gave Linda McCartney a rare vocal lead, but the mediocrity of the one shouldn’t diminish the grandeur of the other, and “Silly Love Songs” is a grand song. Note that it’s unlikely Paul took such a dim view of his own artistry, but was more likely poking fun at his detractors. Let’s hope the pundits and talking heads get the joke before they perpetuate the stereotype.