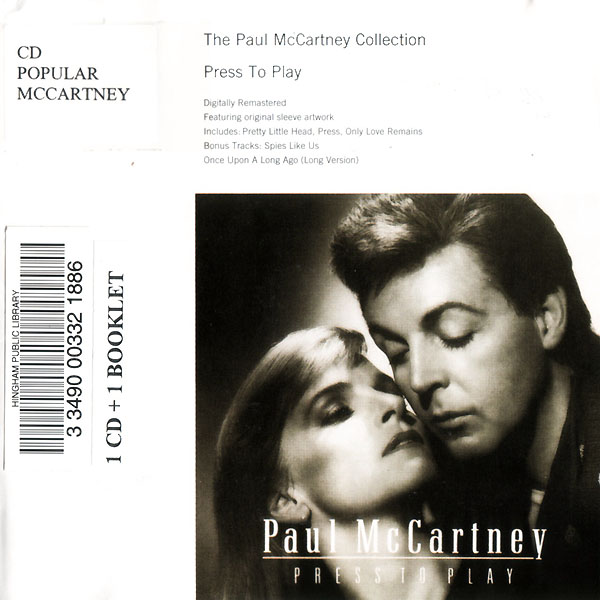 “God knows what happened, but by the time it was finished there were four producers involved and they’d messed up those songs, like ‘Angry,’ totally changed them, a great song called ‘Stranglehold,’ which was a beautiful song we’d written together, buggered it all up with blipping saxes going all the way through the verses.” – Eric Stewart, recalling the magic of making Press To Play in a 2017 interview.

With producer Hugh Padgham (Phil Collins, The Police, XTC, etc.) to give his music a tug in the right (read: modern) direction, Paul released his best album in several years, Press To Play. Unfortunately, after two mediocre records (Pipes, Broadstreet), people weren’t buying the idea of a new Paul McCartney album. It had been almost three years since his last album of new material, and while Paul clearly hadn’t spent all of that time writing songs (one can only assume he wrote the title track for “Spies Like Us” on the ride over to pick up the check), the fact that the three original CD bonus tracks were anything but filler suggests that Paul was still very much alive.

The opening pair, “Stranglehold” and “Good Times Coming/Feel The Sun,” are classic McCartney, and the arguably overproduced “Press” is still a personal favorite of mine. Paul has always been the most forward-looking of The Beatles, and the decision to adopt an edgy, modern sound on Press To Play is gimmicky to the point of distraction sometimes (“Talk More Talk,” “Pretty Little Head,” “Angry”). Better left to Andy Partridge and XTC, I say, though leftover relics like “Move Over Busker” reveal that living in the past wasn’t an option either.

Honestly, the ten elpee tracks themselves are slightly underwhelming on their own; it’s the three “bonus” tracks that push Play into the context of a comeback. “It’s Not True,” originally pressed into service as a B side, “Write Away” and “Tough On A Tightrope” are the sort of smart and winning songs that bolstered many a McCartney album in the past, and it’s here especially that Paul makes a last, favorable impression. The 1993 remaster brings more of Play’s mechanical habits to the fore and includes a pair of bonus tracks that manage to add nothing.