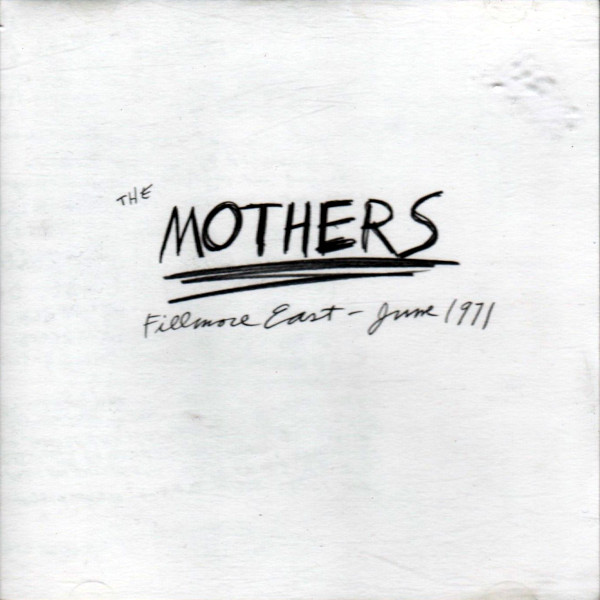 A single-disc live album featuring the humorous banter of Flo & Eddie and the mating call of the mud shark.

Kronomyth 11.o: Tales from the squalid days of rock and roll.

That’s right, you heard right, the secret word for tonight is “Mud Shark.” But for this bawdy tale from the not-so-briny shoals of Seattle, Washington alone, this is required listening. Of course, instrumental fans who hunger for something more filling from Fillmore will find it in tracks like “Lonesome Electric Turkey” and the evergreen “Peaches En Regalia.”

This live record (one of the last from the Fillmore East if memory serves) is one of my favorites from the Flo & Eddie experiment, showcasing their unique stage presence on the dialogue-driven “Do You Like My New Car?” and cascading into a delirious version of The Turtles’ “Happy Together.” Unlike some of Frank Zappa’s live releases, Fillmore East retains the atmosphere of a live show from beginning to end, with a minimum of post-doctoring and a maximum of spontaneous energy (or as spontaneous as a band playing a tortuous track like “Little House I Used To Live In” can get).

“Released in a plain, white sleeve purposefully designed to resemble a bootleg (a subject guaranteed to constantly enrage Zappa), the set stands today as one of the great live albums of all time, capturing the full mayhem of a period Mothers show, a concept piece (dated though its groupie obsessions sound today) that nevertheless captures the boiling preoccupations of the age.” — Dave Thompson, “Frank Zappa: The Controversy and Touring Hell of 1970-71“

Among the other Zappa/Mothers albums out there, Fillmore East reminds me most of the 200 Motels soundtrack, where a similar mix of complicated instrumentals and humorous dialogue songs co-existed happily (although I understand that Uncle Meat tasted about the same too). As an oral history of rock stars and the groupies who love them, Fillmore East puts Professors Flo & Eddie at the podium, overshadowing the rest of the band much of the time. Ordinarily, their monkeyshines steal the spotlight from the erstwhile top banana (Frank) and his phenomenal fretwork. But Fillmore East finds a better balance than Just Another Band From L.A., for example, alternating between the profane and the musically profound in a way that satisfies both camps.

All titles written and arranged by Frank Zappa unless noted.

Cover by Cal Schenkel (he made me do it).