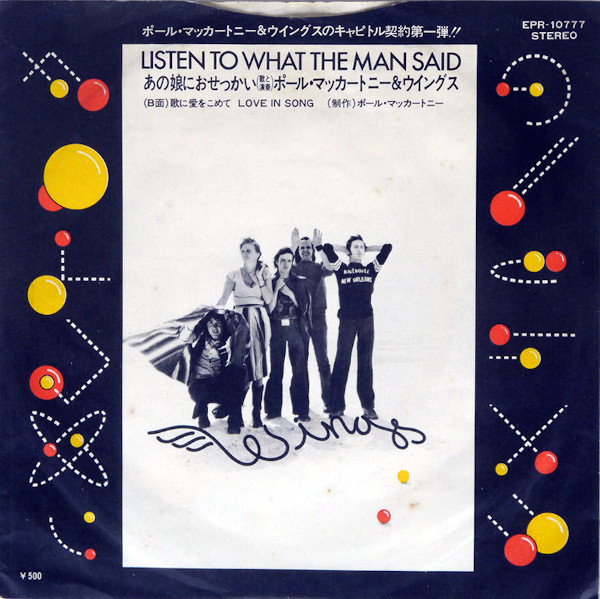 Wings score another interplanetary hit single that probably went gold on Neptune too.

Venus and Mars was basically a hit-or-miss record but, oh, what a hit it was! “Listen To What The Man Said” sounded like nothing else on the radio at the time: fresh, funky and possessing almost supernatural pop smarts in the way that only Paul McCartney songs ever seemed to do. As much as Paul was accused of being out of the loop by the other Beatles, there was something unique, an almost transportative joy for music, that separated hits like “Uncle Albert/Admiral Halsey,” “Jet,” this song and, looking forward, “Coming Up” from anything else on the radio. When the man was on top of his game, no one could top him.

A large measure of the song’s success belongs to the brilliant soprano sax solo delivered by Tom Scott. It makes the song in much the same way that Henry McCullough’s guitar solo on “My Love” does; surprisingly, both solos are first takes. Although all of the Venus and Mars songs were recorded in New Orleans, “Listen To What The Man Said” captures the spirit of that city more than the other session tracks. The song seems to make a few stylistic concessions to disco music, like the pronounced bass and glossy-sounding keyboards. Paul would return to this terrain for his next big hit, “Silly Love Songs” (in fact, the two are really halves of the same sentiment).

The flip side, “Love In Song,” is a miss. At its core it’s a pretty tune, but gets a creaky arrangement that suffers from Paul’s short-lived interest in the Moog synthesizer. The two songs do line up nicely from a thematic perspective, though. In the past, I used to wonder what the radio stations would play to commemorate the death of Paul McCartney. (Oddly, as a child, I believed that Ringo would be the last surviving Beatle. I didn’t, however, foresee the death of radio.) While it will probably be “Silly Love Songs” or “Let It Be,” I wonder if “Listen To What The Man Said” isn’t the right choice. You see, listeners have long speculated who “the man” really is in the song. Is it a love expert? Maybe even God? If you’d really been listening all along, you’d know that, where love songs are concerned, Paul McCartney is the man.