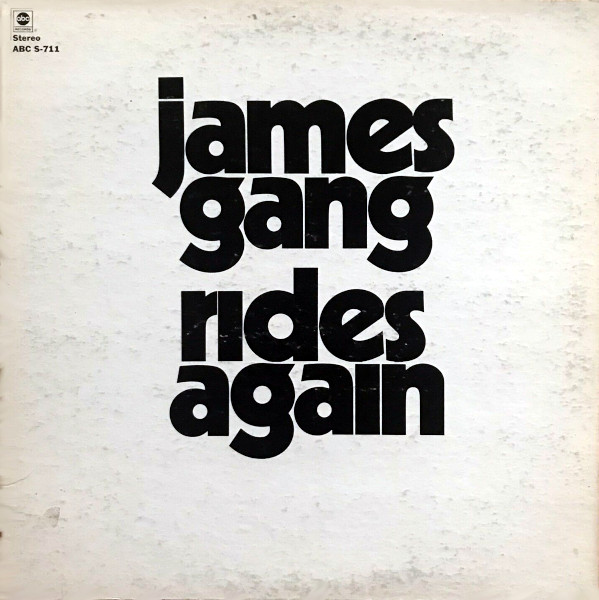 This kicks off with the tight “Funk #49,” then unravels (except for “The Bomber,” which totally Ravels).

In the Johnny Winter of my discontent, I’m liable to point out that Rides Again is a smoother ride than their first elpee, but not the American classic that some would make it out to be. Yes, “Funk #49” is funkin’ awesome. No, the band doesn’t reach those heights again on this album. You’ll find a few more heavy numbers to sink your teeth into—“Woman,” “Tend My Garden,” “The Bomber”—but nothing you’d want to burn a candle to (and then again…).

The trio swapped bass players before this was recorded. I mention that because you probably wouldn’t notice the change on record. Drummer Jim Fox does seem to be higher in the mix and he sounds terrific on this album. Joe Walsh is again the centerpiece, although he plays fewer keyboards this time. The second side of the album is essentially a Joe Walsh solo album; unfortunately, it’s not their best side. I mean, it’s cute to hear the band play with Poco’s Rusty Young, but if you can’t outrock Poco (and they don’t on “There I Go Again”), you should have your power-trio privileges revoked.

The album closes on the acoustic “Ashes The Rain And I,” an epic number featuring orchestration from Jack Nitzsche. It’s tantalizing songs like this that make me wish James Gang would add an extra player or two and really write an important studio rock album. I know, I’m a progressive rock weenie, and we love to have complexity where simplicity will do. It’s just that an album is an opportunity to make a statement and, when you have a producer of Bill Szymczyk’s abilities on your side, shouldn’t you (as the outlaws are fond of saying) reach for the sky?

Proving that I know nothing, Mobile Fidelity released an original master recording of Rides Again, a distinction normally reserved for classic albums. I have to believe that, without “Funk #49,” this never would have occurred. Second Winter, They Only Come Out At Night, I’m totally with you there. James Gang Rides Again, however, probably wouldn’t make my list of top 100 albums from 1970. I don’t actually have a list like that, and never plan on making one, but if I were forced to do it (e.g., “We only have 60 seconds to make a list of the top 100 albums from 1970 before this bomb explodes!”), then I would probably write this on the bottom and then scribble it out and replace it with Poco or something.

On a more serious note, Rides Again benefits by focusing on the band’s music rather than the silly studio gimmicks found on their first album. There’s none of that “lovable anti-establishment pranksters” stuff happening on here, except maybe the mock Santana excursion in “Funk #49.” The band’s brand of gritty, guitar-driven, funk/blues-inspired rock and roll (shoot, that’s a lot of labels) may appeal to connoisseurs of gritty, guitar-driven, funk/blues-inspired rock and roll, but it’s harder to ride uphill than downhill, and things definitely go downhill after the first track.

Arranged by The James Gang.