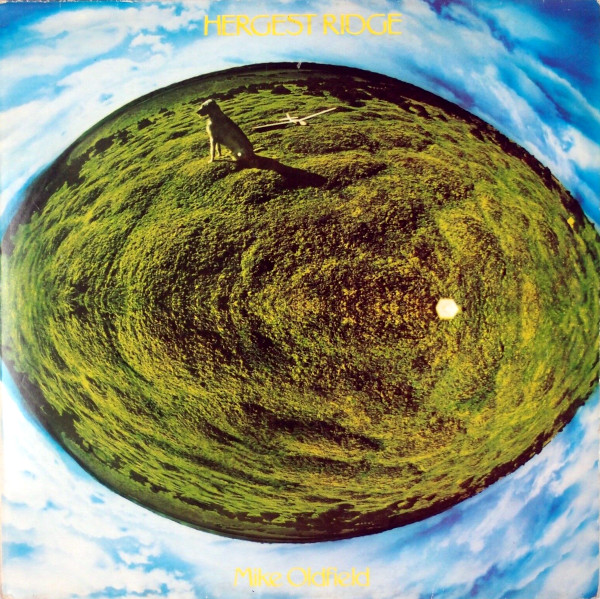 Inspired by my rhyming review of Tubular Bells, my original review of Hergest Ridge followed the same idea but to weaker effect:

“She rises from the mist, this belle, and has a different tale to tell, emerging from the rills and ridges to share with us her humble riches. More pastoral in tone than her piebald predecessor, a simpler patchwork and perhaps the lesser of the two, the first work having grew from such a tempest of expression, while Hergest here is glimpsed in logical succession.

“It’s interesting that, after such a tubular design, a second album doesn’t dare entwine too many bits and pieces, fearful of a work that rises and surceases. Oldfield here is on a simpler path, his waterfall of inspiration channeled into one warm bath. You’ll find some Crimson in it (on guitar), some Genesis as well (seen from afar), but mostly this is Oldfield first and last, a vision of the future and the past.

“The artist, having found an audience, is careful not to build a wood too dense, focusing instead on several themes, from tame to tempest as befits the scene. (I’ll add, although it’s quite a different bird, that one theme sounds a lot like “Mongoloid.”) If Hergest Ridge is not the tumbling spire that Tub’lar Bells aspired to, desire not a second mountain in your midst, but chance upon a rolling hill as this and marvel at its natural, simple charm, a pixie playground where there is no varum. (Sorry about this one. Ze furter I vent, ze verse it got.)”

As you can see, a weak imitation of the first. Which, quite accidentally, may be a better review of Hergest Ridge than I first realized. Mike Oldfield was in the unenviable position of having to follow up the massively successful Tubular Bells with another great record. And he did, sort of, with Hergest Ridge again topping the UK charts, only to subside under a second wave of enthusiasm for his first album. Thus, Oldfield’s second album is now (perhaps rightly) regarded as a pale successor to his first.

I would tell you that Tubular Bells is the more exciting record, and Hergest Ridge the more cohesive. Oldfield chooses a main theme and several supporting themes and weaves them together with painstaking arrangements, myriad overdubs and, inevitably, an orchestra. The sound of Hergest Ridge is much warmer (Oldfield having exorcised his demons on the first) and often feels like a sea voyage set to music. Throughout, I was impressed that Oldfield had again found a way to make modern “electronic” music using organic instruments—i.e., there are several moments where it seems impossible that no synthesizers were used.

This mix of medieval and modern may be the crowning achievement of Hergest Ridge. Or maybe its conquest is simply that Oldfield set out on a second venture that was doomed to disappoint on some level. Viewed as a calmer cousin to the turbulent Bells, it’s an album that ridgely rewards repeated listenings, especially if the idea of a proggy sea chanty captures your imagination.

All songs composed by Mike Oldfield.