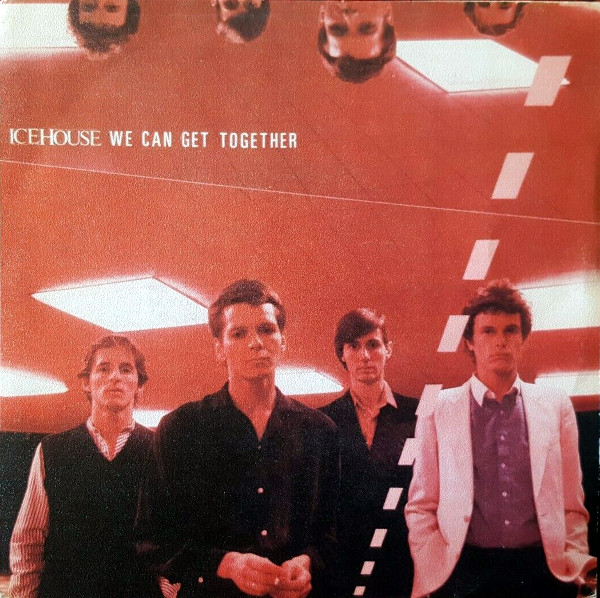 The band’s first big hit, it’s good enough to give The Cars a run for their money.

Music is a panacea that balances the highs and lows. Now, I suppose the better thing is to have a naturally stable mind, but in the absence of that a band like Icehouse can work miracles, at least for a few minutes. I’ve always been partial to the remedial effects of Icehouse, no doubt because of shared musical affinities (David Bowie, Brian Eno, Roxy Music, The Cars). In fact, I was convinced they were destined for great things after their first two albums, but I thought the same about The Specials and Haircut One Hundred, so clearly I know nothing about anything.

The band’s first big single was We Can Get Together, a song that immediately invites (favorable) comparison to The Cars with its stylish retrofitting of synthesizers onto a guitar-rock chassis. In fact, you could convince me that Greg Hawkes snuck in a cameo appearance here. The song also featured a sophisticated video using an illustration effect that preceded a-ha’s “Take on Me” by several years. In a rare case of superior musical judgment, this song charted better in the US than the UK. Clearly, our English counterparts were asleep at the wheel.

As a testament to just how good their first album was (is? will forever be?), the ultracool 10-inch UK single featured two nonalbum tracks. Send Somebody, a song cowritten with once and future Icehouse member Michael Hoste, is a very solid number that reminds me of “Joe the Lion” but less, um, chewy. (I’m using that as a placeholder until I think of a better word.) The instrumental Paradise Lost is even better: a mixture of the best parts of “Here Come the Warm Jets” and “On Some Faraway Beach” with the line “You don’t scare me, Mr. President” appearing at intervals. I’ll assume that line is aimed at Ronald Reagan, since Malcolm Fraser seemed a nice enough bloke.

In the US, the B side was Not My Kind, which may be why that single charted better, since that is awesome, a kind of marriage of Bryan Ferry and Gary Numan. Spain for some reason selected Skin as the flip, which is as close as the first Icehouse comes to filler (i.e., not very close at all). Of interest, the Australian single was first released in June 1980 when the band was still called Flowers, and preceded the release of their first album by a few months. It was selected as the first single when the album (now credited to Icehouse) was re-released internationally in 1981.