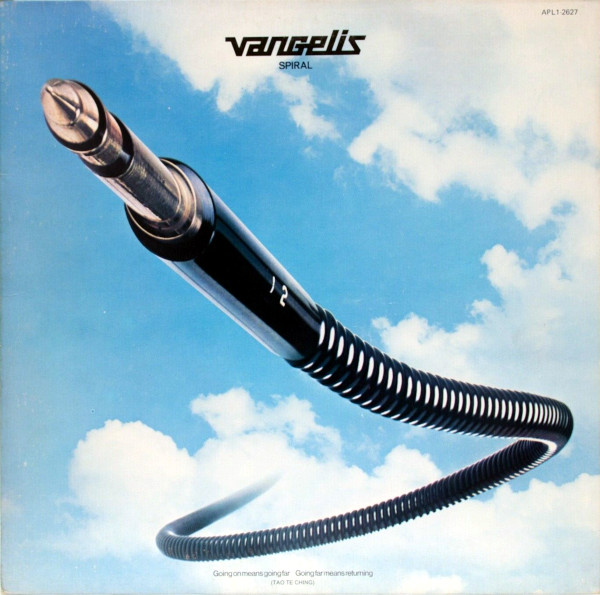 A direct and accessible album of sequencer-based songs sandwiched in between some of his heaviest concept albums.

Spiral is Vangelis’ most accessible album to date, with the caveat that “accessible” is apparently a coded word for some meaning “simplistic” or “uninteresting.” I’ve always found it to be one of his most directly enjoyable works, with clever use of sequencers and a certain warmth in the melodies that invariably reminds me of Christmas. The album’s most recognizable track is “To the Unknown Man,” which could be heard as a playful variation on a familiar theme from Vangelis. Spiral also has a pronounced bluesy element that longtime listeners will immediately associate with the Bladerunner soundtrack.

The album’s opening sequence of sequencers feels like a bottle of champagne being uncorked. Spiral is classical in construct, majestic in nature, as Vangelis makes his triumphant return to our turntables. On Ballad, Vangelis sings the blues, sort of, adding his muffled voice to a simple melody for an effect that is as distracting as it is interesting. Dervish D, which would seem to continue the “spiral” theme (I don’t actually think there is a unifying theme on the album, only the pretense of one), is Vangelis’ embellishment of a simple blues riff.

To the Unknown Man is part of a thematic continuum that began with “Third Movement” from Heaven and Hell and culminated in the theme to Chariots of Fire. You could probably string together an entire album’s worth of music under the category of “Vangelis songs that sound like that song from that movie.” 3 + 3 closes the album on an uncharacteristically playful note. It’s one of several tracks where I was reminded of Mannheim Steamroller’s Christmas albums. Maybe it’s the use of synthesizers and sleigh bells or the lighthearted melodies, but Spiral does seem to emanate from a happier place than either Heaven and Hell or Albedo 0.39.

There is certainly room for a Vangelis album that doesn’t sit you between the eternal struggle of good and evil or send you into the remotest regions of space. Spiral doesn’t seem to want to do more than make human music with sequencer technology. You could hear it as Vangelis streamlining the process (as I do) or simplifying it, but it’s an album that many have taken to heart. I tend to swing back and forth between appreciating its directness and disparaging it for the same, which says more about my own moods than any intrinsic merit or flaw in the music. And the opening moments of “Spiral” never fail to give me chills.

All songs written by Vangelis.

Vangelis (all instruments). Produced by Vangelis; engineered by Keith Spencer-Allen.