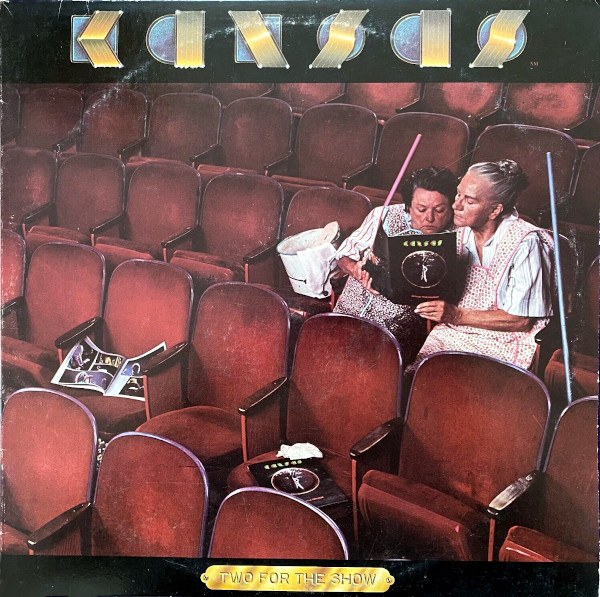 A fantastic live album that shines a flattering light on their entire catalog.

After two multiplatinum albums, Kansas packaged its last few tours as a live double album, Two for the Show. Despite the band’s recent success, I didn’t expect this album to be as good as it is. The songs from Leftoverture and Point of Know Return are just like you remember, but it’s the earlier songs that really sparkle. Song for America, Journey from Mariabronn, Mysteries and Mayhem and the rest are anything but leftovers. For the first time, the genius of the early material is in plain view, the beneficiaries of the band’s newfound confidence.

On stage, the songs feel streamlined. Maybe it’s the tight production, which seems to bury the two guitars in favor of the drums and bass, but the arrangements hit you right between the ears. At no point does it feel like the violin, guitars and keyboards are trampling on one another. Even a busy song like Paradox moves along briskly and balanced. In truth, the band’s body of work has never seemed so uniformly brilliant as it does here.

I had earlier referred to their last album as the peak of Kansas, yet I would count Two for the Show the band’s greatest achievement. It’s one of the best live albums I’ve heard (take that, Peter Frampton) and hands-down the best Kansas album pound for pound. In fact, the concert serves as better greatest hits package than any of their subsequent compilations. Years later, the album was expanded with a second disc of songs from the concert which I’m sure includes even more awesomeness.

True, the album doesn’t capture the visual spectacle of seeing Kansas live. Not that I need to see Steve Walsh in a pair of undersized gym shorts, but Robbie Steinhardt was always fun to watch. Here, Kansas ascends to the first tier of progressive rock stars. Two for the Show made me re-evaluate the early works while re-affirming the genius of songs like Portrait (He Knew), Dust in the Wind and Carry On Wayward Son. It turns out there is a lot more to Kansas than two great albums. Too bad they couldn’t sustain that greatness into the 80s.

Original 8-track version
A1. Song for America
A2. Point of Know Return
A3. Paradox
A4. Icarus – Borne on Wings of Steel
B1. Dust in the Wind (acoustic guitar solo)
B2. (piano solo) Lonely Wind
B3. Mysteries and Mayhem
B4. Excerpt from Lamplight Symphony
B5. The Wall (part 1)
C1. The Wall (conclusion)
C2. Portrait (He Knew)
C3. Carry On Wayward Son
C4. Closet Chronicles
D1. Journey from Mariabronn
D2. Magnum Opus

30th Anniversary Edition 2CD version
A1. Song for America
A2. Point of Know Return
A3. Paradox
A4. Icarus – Borne on Wings of Steel
A5. Portrait (He Knew)
A6. Carry On Wayward Son
A7. Journey from Mariabronn
A8. Dust in the Wind – Acoustic Guitar Solo
A9. Lonely Wind – Piano Solo
A10. Mysteries and Mayhem
A11. Excerpt from Lamplight Symphony
A12. The Wall
A13. Magnum Opus
B1. Hopelessly Human
B2. Child of Innocence
B3. Belexes
B4. Cheyenne Anthem
B5. Lonely Street
B6. Miracles Out of Nowhere
B7. Drum Solo – The Spider
B8. Closet Chronicles
B9. Down the Road
B10. Sparks of the Tempest
B11. Bringing It Back