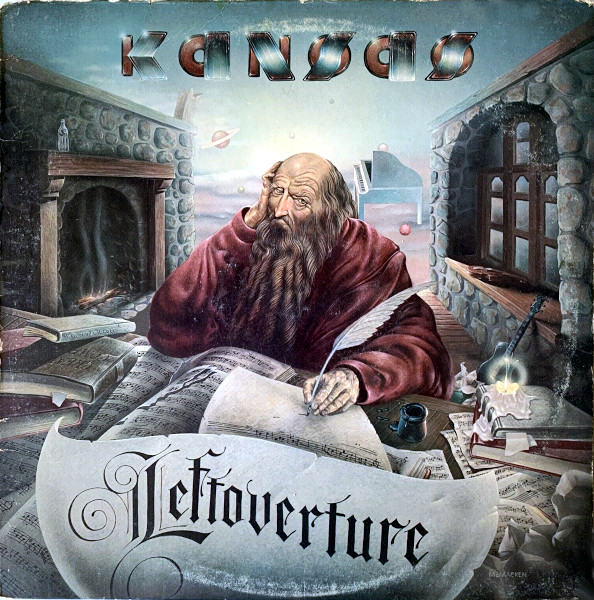 A classic American progressive rock album that, together with Boston and Styx, marked the arrival of a new England.

Kronomyth 4.0: A miracle out of nowhere

Anyone who tells you this isn’t a classic progressive rock album is lying through their yellow English teeth. The first side of Leftoverture is simply one of the most perfect sides of plastic in all progdom. The second side is a bit uneven, reaching sublime heights only occasionally. Earlier Kansas albums scratched at the door of the progressive masters, but on Leftoverture they blast through the door like a battering ram.

Kansas and Styx both seemed to vacillate between wanting to be an American hard rock band and an English progressive rock band. Then, suddenly, something just clicked and you had Leftoverture, The Grand Illusion, Point of Know Return and Pieces of Eight. In the case of Kansas, a bout of writer’s block from Steve Walsh may have been the deciding factor, as it allowed (forced?) Kerry Livgren to write most of the material. Livgren’s tastes had always pointed toward progressive rock, and one can only assume that he locked himself in a room before writing these songs and listened to a steady diet of Genesis, Yes and Gentle Giant.

Which isn’t to say that Leftoverture is a copycat album. In fact, I would say that it improves upon the English formula by giving it some new teeth. (There we go again with the teeth thing.) Carry On Wayward Son rocks as heavy as Deep Purple, then slips into regal robes for passages of kingly carriage. The Wall, What’s on My Mind and Miracles Out of Nowhere borrow bits of Genesis and Gentle Giant and fashion them into heavier creations, as if Bad Company had spent its time in better company.

The second side, as I said earlier, has its moments, particularly during Cheyenne Anthem (one of only two songs to feature Robby Steinhardt on lead vocals) and Magnum Opus. Given that the band was fairly new to the idea of being a tightly knit prog band, they do an amazing job of stitching everything together. I had a new appreciation for Rich Williams after hearing this album (I was already pretty impressed with Phil Ehart). And, far from taking himself out of the picture, Steve Walsh is critical to the success of this music, singing most of the lead vocals and expanding his keyboard repertoire to include vibes.

While it’s definitely a progressive rock album, Leftoverture can lay equal claim as an early example of progressive metal. In that sense, the band still straddles the worlds of hard rock and prog. The same could be said for Styx, Queen and Foreigner, all of whom seemed to be cresting in the second half of the 70s. It was a good time to be a teenager, with your foot on the gas and your head in the clouds.

All songs arranged by Kansas.

Original 8-track version
A1. Opus Insert
A2. Miracles Out of Nowhere
B1. Questions of My Childhood
B2. Cheyenne Anthem
C1. Magnum Opus
C2. The Wall (Part 1)
D1. The Wall (conclusion)
D2. What’s on My Mind
D3. Carry on Wayward Son