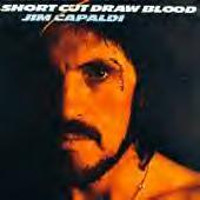 Again featuring contributions from Traffic members past and present, Short Cut Draw Blood produced the biggest hit of Jim Capaldi’s career with a discofied version of the old Everlys chestnut, “Love Hurts.” That song is a likeable but light number on an album that finds Capaldi stretching into everything from ska (“Johnny Too Bad”) to Dylanesque poetry (“Keep On Tryin’”). It’s his most stylistically varied album to date, although at its core it retains the percussion-propelled, dark musings of latter-day Traffic (“Goodbye Love,” “Short Cut Draw Blood,” “Boy With A Problem”). His last record was more consistent; this one is more surprising. As a bonus, the non-album single “It’s All Up To You” was included here; an outmoded lovesong that belongs somewhere between the British Invasion and Dave Mason. Short Cut Draw Blood does showcase Jim Capaldi’s range as an artist; the venomous “Living on a Marble” (one of my favorite tracks on here) and ethereal “Seagull” (a mini Traffic reunion of sorts) lie at opposite ends of the musical spectrum. Of interest, Paul Kossoff plays on “Boy With A Problem,” a song written about Chris Wood’s struggles with alcohol that warns “Soon from this earth he will leave,” a warning Kossoff himself might have heeded. I would tell you that this record continues to make a case for Capaldi as the logical heir to Traffic’s legacy, but I say a lot of things in the course of a day and not all of it makes sense. He does seem capable of sustaining a solo career, which, in a world where Ringo reigned supreme, isn’t that surprising (“Love Hurts” was a ploy pulled directly from Ringo’s playbook). All in all, a bloody good record with a few cuts that would make my short list for the cream of Capaldi.