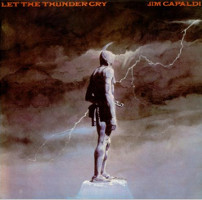 Kronomyth 7.0: DISCO IS DEAD, LONG LIVE ROCK. Finally, a fitting followup to Short Cut Draw Blood. Let The Thunder Cry is a similarly pleasant potpourri of pop/rock with a good dose of social conscience and a little romance thrown in good measure. The first side of music is especially strong; so much so that, when a rocking cover of “Louie Louie” rolls around, Capaldi has earned the good will to pull it off. Highlights include the title track (a sympathetic rocker about Native Americans), the lithe “Favela Music,” “Child In The Storm” and the slightly edgy “We Don’t Need.” The melodies are familiar; you get the sense that you’ve heard “Only Love,” “Dreams Do Come True” and “Anxiety” somewhere before, but you’re happy to make their acquaintance again. In the case of “Old Photographs,” it seems that Capaldi has updated the classic “No Face, No Name, No Number,” and the two songs reveal that not so much has changed in the last twenty years. Capaldi’s range on this record is pretty impressive. He can rock, stir things up or play it smooth. The disco years may not have produced many timeless hits, but they do seem to have given him more confidence as a singer. The performances on “Warm” and “Only Love,” for example, are those of a first-tier balladeer. As with the aforementioned Short Cut, there really isn’t a bad song on here. It’s a solid, intelligent record that isn’t too commercial or antisocial. Once again, Capaldi carves out a niche for himself as an intelligent middle-of-the-road rocker who isn’t afraid to throw in a few love songs in between trying to save the world. [When this album was released on compact disc, it featured two additional songs: an acoustic version of “The Low Spark of High Heeled Boys” and the nastier “Bathroom Jane.”]

The Pictures
Illustration by Ron Fenton. Back cover photography by Mikail Cipra.