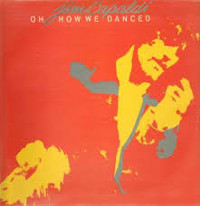 Jim Capaldi’s first solo album owes as much to abdominal inflammation as inspiration. Steve Winwood had developed peritonitis, an inflammation of the abdominal lining, which effectively shelved the next Traffic project while he recuperated. In the interim, Chris Blackwell (never one to miss an opportunity to market Traffic) bankrolled a studio album by Traffic’s lyricist, occasional singer and tambourine player, Jim Capaldi. Oh How We Danced featured Traffic mates past, present and future as well as Free’s guitarist, Paul Kossoff. Despite the heavy Traffic presence, Oh How We Danced doesn’t sound like a Traffic record any more than Dave Mason’s albums did. In other words, if you’re expecting another “Light Up Or Leave Me Alone,” all you’ll be left is disappointed. Now, that said, a lot of people enjoy this album; I’m just not one of them. Ringo Starr’s records, for example, were a lot more fun than this. I came here expecting great lyrics and dark shadows, and all I hear are middle-of-the-road rock songs with very average (or worse) lyrics. Case in point: “Don’t be a hero, heroes are sad / Don’t be a hero, it’ll make you feel bad.” I’m not saying Capaldi wasn’t a great lyricist, I’m just saying you wouldn’t know it from this album. So if you’re wondering what’s really on Jim Capaldi’s mind, you won’t be any the wiser after Oh How We Danced. I guess that’s my main complaint with the album; it feels like Jim Capaldi trying to make a Dave Mason record rather than a Jim Capaldi record. Subsequent albums followed the same formula, though, so maybe it was just that Traffic’s lyricist didn’t have much to say on his own. I know, that’s not what you wanted to hear. Honestly, it’s not what I wanted to write. I would have loved to tell you that here was a hidden treasure, and maybe you’ll still discover one (if everyone had my taste, record stores would only carry Jethro Tull discs), but you didn’t hear it from me.

CD bonus track
9. Going Down Slow All The Way

The Plastic
Released on elpee in April 1972 in the UK (Island, ILPS 9187), the US (Island, SW-9314), Australia (island, SIL 934575) and Japan (island, ICL-30) with lyric sleeve; reached #82 on the US charts. The Australian/Japanese release featured a gatefold cover with different artwork on the front; this cover artwork was used for subsequent CD releases. Re-issued on CD on March 26, 2012 (Esoteric) with one bonus track; it appears that two different shots of Capaldi were used for the cover.