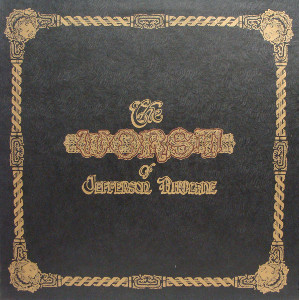 [Kronomyth 7.0]
In the Gardens of Memory, in the Palace of Dreams.

In a more perfect world, they would put a statue of Jefferson Airplane near the Capitol Building (ideally, with their backs against one wall), yet, even doing that, you won’t find a better monument to the band’s achievement than The Worst of Jefferson Airplane. It might be the one American rock record from the 1960s that everyone should own. The selection is not only generous but also does a brilliant job of condensing a difficult oeuvre into a succinct, sensible package. “Today,” “Embryonic Journey” and “Lather” aren’t obvious choices, but they are informed choices, painting the picture of a band with very different personalities. Do you need to hear “Chushingara” to appreciate Jefferson Airplane? Maybe not, but you do need to hear it to appreciate “Lather,” and it’s that kind of thoughtfulness that makes The Worst such a wonder. In a world where quick cash-grabs were quickly becoming the norm, this record is a throwback to a nobler age. It also does an excellent job of judiciously displaying the contributions of Marty Balin and Grace Slick, nowhere more eloquently stated than in the juxtaposition of “Somebody To Love” and “Today.” In the 21st century, a pair of extra tracks were added (“Greasy Heart,” “Watch Her Ride”) to cover the essential singles, but The Worst isn’t a better album for it. In either version, The Worst of Jefferson Airplane is the best way to experience the band for the first time. After that, enjoy the ride through the rest of their catalog.