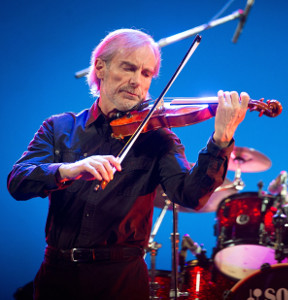 While the world probably could have used another jazz-fusion guitarist, what it really needed was a jazz-fusion violinist, a point that Ponty embodied.

Somewhere in the dim and mote-filled halls of the conservatory/factory where young, impressionable hands are chained to the Byzantine machines of long-dead madmen, one mind rebelled. It was the gypsy music of American jazz, the exotic smoke that spilled from the bronze censers of Miles Davis and John Coltrane, that captured the imagination of a young student named Jean-Luc Ponty. When the smoke cleared, the classical world and its dying gods were one gray, gifted violinist poorer, and the rest of the workaday world one technical electric violinist richer.

An album of unremarkable (save for the remarkable presence of the violin) bebop followed in the form of Sunday Walk (1967), but the real magic began when Ponty plugged in his violin and began making jazz fusion albums. In between apprenticeships with the archmages Frank Zappa and John McLaughlin, Ponty quietly went about setting the jazz world on its ear by thrusting his electric violin into the new language of electric jazz, beginning with the grand guignol gesture of an entire album of Zappa compositions recorded with the Mothers, King Kong (1970).

After the Mahavishnu Orchestra, Ponty swam into the wide, cold arms of Atlantic and began making progressive rock/fusion albums that capitalized on the commercial market created by Mahavishnu, Return To Forever, Weather Report, etc. By the release of Imaginary Voyage (1976), a Ponty album could be expected to rise near the top of the US Jazz charts and make a rumbling among the general record-buying public as well.

The Atlantic Years (1975-1985) represent for many the sirloin of his body of work, although by Individual Choice (1983) his growing interest in synthesizers and a general sameness in his work (which had admittedly been there from the beginning) suggested that his progressive rock experiment had run its course, a discovery that most progressive artists had made simultaneously. As with many of his contemporaries, Ponty took his adventurous spirit into the field of world music, releasing Tchokola (1991) and No Absolute Time (1993) with African musicians. In 1994, he teamed up with Al Di Meola and Stanley Clarke for an acoustic world tour that resulted in one album, The Rite of Strings (1995). A decade later, he and Clarke repeated the experiment with Béla Fleck.

In the coffeeless coffee shops of the progressive pedant, debate still rages on over the greatest fusion jazz guitarists, but among these hierophants of higher musical consciousness few would begrudge Ponty his pedestal as the greatest electric fusion violinist of his era. The man has carved out a remarkable niche for himself, and while a strict diet of Ponty would be restrictive, I can personally and heartily endorse Upon The Wings of Music (1975), Aurora (1976), Imaginary Voyage (1976), Enigmatic Ocean (1977), Live (1979) and Fables (1985).

CANTELOUPE ISLAND (1976)
King Kong / Idiot Bastard Son / Twenty Small Cigars / America Drinks And Goes Home / How Would You Like To Have A Head Like That / Music For Electric Violin And Low Budget Orchestra / Foosh / Pamukkale / Contact / Canteloupe Island / Starlight, Starbright. Compilation featuring Live In Los Angeles and King Kong released on 2LP in 1976 in the US (Blue Note, BNLA-632).

VIOLIN SUMMIT (1979)
Bowing-Bowing / Golden Green / Memorial Jam For Stuff Smith // Violin Summit No.2 / Valerie. Archival recording from December 1973 co-credited to Stephane Grappelli and released on elpee in 1979 in France (America, 30 AM 6139) and Canada (Everest, FS-355). Repackaged without title on elpee and cassette in 1981 in the US (Inner City, IC/TIC 1005). Re-released and repackaged in the 1980s on elpee, CD and cassette. Repackaged as Jazz Violin Summit on expanded CD with six bonus tracks on November 9, 1999 (Legacy, 477).