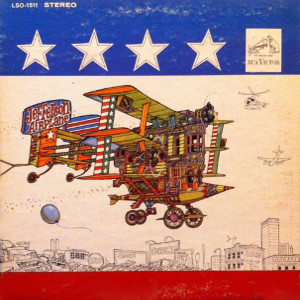 The Airplane continued to fly into the outer fringes of rock with the psychedelic masterpiece, After Bathing At Baxter’s. Presented as a series of themed sections (e.g., Streetmasse, The War Is Over, etc.), the songs were actually written over several months and likely conceived as individual acid trips (“bathing” is a code word for tripping). Although not as accessible as their last album—nothing here has the immediacy of a “White Rabbit” or “Somebody To Love”—the album contains some indelible moments of music: “The Ballad of You & Me & Pooneil,” “Martha,” “Watch Her Ride,” “Two Heads.” I get the sense that Kantner and Slick were actively hijacking the Airplane at this stage, steering it into higher altitudes of consciousness. Balin is merely a passenger, present on vocals but contributing only one track (albeit a good one), “Young Girl Sunday Blues.” A second song written by Balin during this period, “Things Are Better In The East,” reveals him to be the straight man in a band of kooks. Whether it was mutiny or mutation, the Airplane quickly became something bigger than Balin first imagined, from psychedelic balladeers to psychedelic pioneers. When it was released, Baxter’s was at the edge of progressive music, making heavy use of distortion, stream-of-consciousness and other advanced studio techniques, for which producer Al Schmitt was along for the ride, not an architect. If you were to make the case for Jefferson Airplane as a progressive rock band (and it would be a short argument relegated to a few albums), After Bathing At Baxter’s would be Exhibit A. It is an album that rewards repeated listenings and (presumably) altered states, with rich lyrical imagery to mine for meaning, particularly from Grace Slick. Like I said, it doesn’t have a readymade hit on which to hang your hat, but there’s enough mind candy here to occupy two heads.