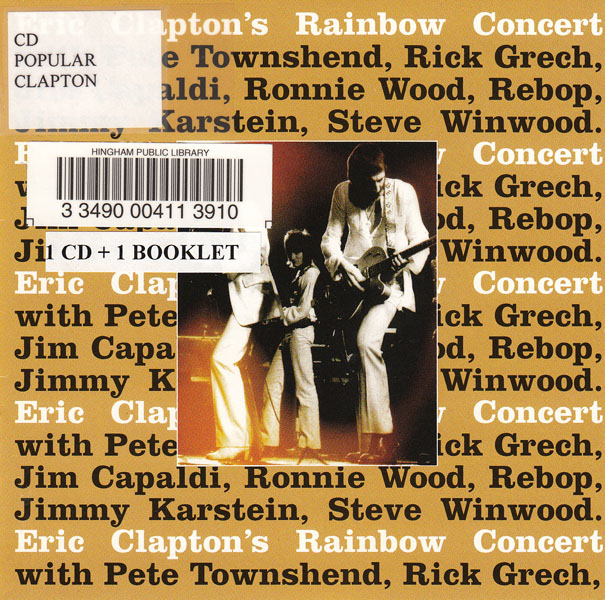 Some people would have staged an intervention for Clapton. His friends staged a concert instead.

Kronomyth 2.0: The rainbow connection, the lovers, the dreamers and me.

You know the story, so I’ll spare you the gory details. Suffice it to say that Eric Clapton finally came out to play, and Pete Townshend comes out smelling like a rose. The original Rainbow concerts consisted of two shows (both on January 13, 1973), billed as Eric Clapton and The Palpitations, and you could rightfully expect some with the likes of Clapton, Townshend, Steve Winwood, Ron Wood and supporting members of Blind Faith and Traffic sharing the same stage.

Despite conditions that were ripe for failure (Clapton’s heroin habit, a scant ten days of rehearsal), the concerts were an unqualified success and showed that Clapton had lost little of his edge and ability. The resulting elpee, unfortunately, was a heavily abridged version of the concerts reduced to six tracks including one by Traffic (“Pearly Queen”) and a little-known Derek & the Dominos b-side, “Roll It Over.” If you bought that elpee, you got rolled indeed. The 14-track remaster is an act of atonement that draws from both shows to present something much closer to the actual concert experience, in chronological order with only two tracks missing (“Why Does Love Got to Be So Sad,” “Nobody Knows You When You’re Down and Out”).

If you see the original elpee in a used record store somewhere, punch it for me. Then go buy this expanded remaster, because there’s a shortage of miracles in the world and this is surely 1 of them; 2 bad it took 22 years to roll around. I’d rank this as the most essential of Clapton’s live records, and then I’d tell you confidentially that live records aren’t really made to be listened to over and over; they’re reference documents, like a thesaurus. As you slough through some of Clapton’s mediocre studio albums and wonder why people bothered showing up at all, return to the Rainbow and your faith in the man’s star presence will be renewed.