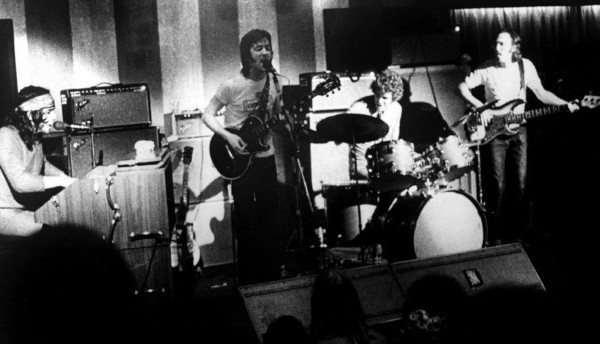 Ah, the English and their love of legend. Derek is Eric Clapton in disguise, the Lancelot to George Harrison’s Arthur and Pattie Boyd’s Guinnevere, with Bobby Whitlock, Carl Radle and Jim Gordon rounding out the table and Duane Allman as the American knight errant. The group’s one and only studio record, Layla (1970), was released at nearly the same time as George Harrison’s All Things Must Pass (1970), which also featured Derek and his Dominos minus Allman. Those two releases, totaling five elpees, represent some of the best music this side of The Beatles and Cream.

The group’s origins have their roots in Delaney and Bonnie Bramlett, as everyone in D&D had previously played in the Bramlett’s band. When Bobby Whitlock left the band, he joined Clapton in England and they began to work on new material. Radle and Gordon, who had also appeared on Clapton’s first solo album, were brought in to play with George and Eric, and the Dominos were born. Unfortunately, Derek (Eric) and his Dominos turned out to be as short-lived a supergroup as Blind Faith. Bookended by the death of two great guitarists (Jimi Hendrix, Duane Allman) and beset by various addictions, D&D disappeared, leaving a live concert album in its place. Like Harrison’s ATMP or Stephen Stills’ Manassas, Layla And Other Assorted Love Songs (as it is sometimes credited) is the most creative and substantive work in Clapton’s entire solo catalog. A reunion is out of the question, sadly, as Radle passed away in 1980 and Gordon was institutionalized in 1983. Some have suggested the band was cursed, but I think we’ve already crossed that road before.