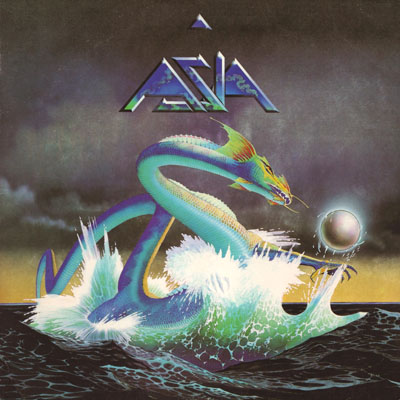 From the ashes of Yes, ELP and U.K. rose Asia. Be careful what you ash for…

In 1979, ELP disbanded. In 1981, Yes followed suit. Out of their ashes rose Asia. I recall at the time being really excited at the prospect of Steve Howe, Carl Palmer and John Wetton working together. That is, until I heard this album. To say it was a disappointment would be an understatement. I hated this album when it came out. Asia was everything that prog rock railed against: power chords, cheap sentiments, commercialism over creativity.

With time, I remembered that Yes and ELP had been selling out arenas for years, and in fact were as responsible for arena rock as anyone. That and the gradual appreciation of Steve Howe’s contributions to this record eventually softened me on Asia, to the extent that I finally began buying up other Asia albums. Invariably, I would grumble about how bad they were (particularly Alpha), but I admit to taking some pleasure in their music, if only out of the misplaced loyalty that plagues most proggers.

Now, just to be clear, I’m not defending “Heat of the Moment,” “Only Time Will Tell” or “Sole Survivor.” Those songs are terrible. But “One Step Closer,” “Time Again,” “Without You” and “Cutting It Fine” are good, especially when weighed against whatever instrumental album Howe or Palmer would have otherwise been making at the time. Geoff Downes also emerges as a pretty decent prog keyboardist; anyone who can hold their own with this trio deserves some credit. As for Wetton’s voice, it’s still a powerful commodity, I just wish it had been used for good (e.g., U.K.) instead of evil (this).

My grouchiness aside, Asia is a classic rock record, and if you have happy memories associated with it, I understand and even envy you a little. For me, it seemed like the final nail in prog’s coffin, but we’ve already been over what a Drama queen I am where Yes is concerned.