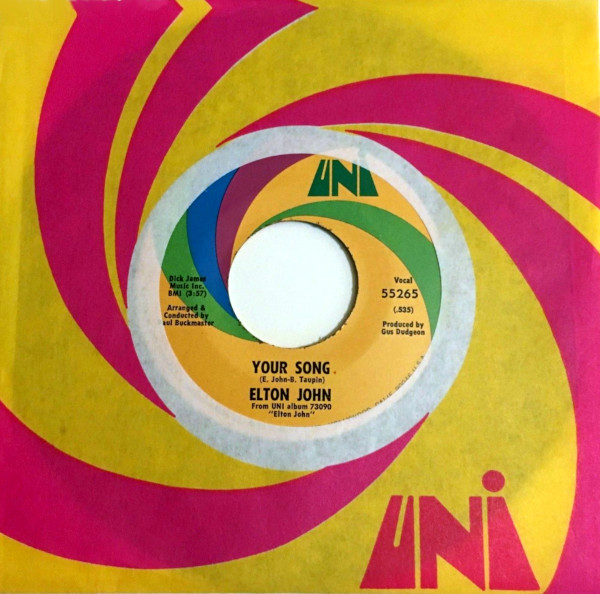 This sentimental love song was Elton’s most successful single at the time of its release, becoming a Top 10 hit in the US and the UK.

Kronomyth 2.9: Ballad of a well-known song.

In lieu of a proper single from Tumbleweed Connection, the labels trotted out the perennial favorite, “Your Song,” days before the new album’s release. It wasn’t a bad move, since Tumbleweed didn’t have an obvious single in its story-based framework (a tumbleweed conundrum, if you will). “Your Song” promptly became his most successful single to date, reaching the Top 10 in the UK and the US.

I would tell you it’s one of the prettiest love songs ever made, but you don’t really need me to tell you that. What I can’t tell you is how many people bought Tumbleweed Connection thinking “Love Song” was actually “Your Song.” In the US, “Take Me To The Pilot” was featured on the flip side; if you bought that single, you had the two best sides of Elton John on a seven-inch piece of plastic. The UK single did something different, digging out the nixed Tumbleweed track, “Into The Old Man’s Shoes,” as the B side. It’s too bad the labels weren’t able to pack these shoes for the original Tumbleweed trip, since it would have fit well within the Western story after, say, “My Father’s Gun.”