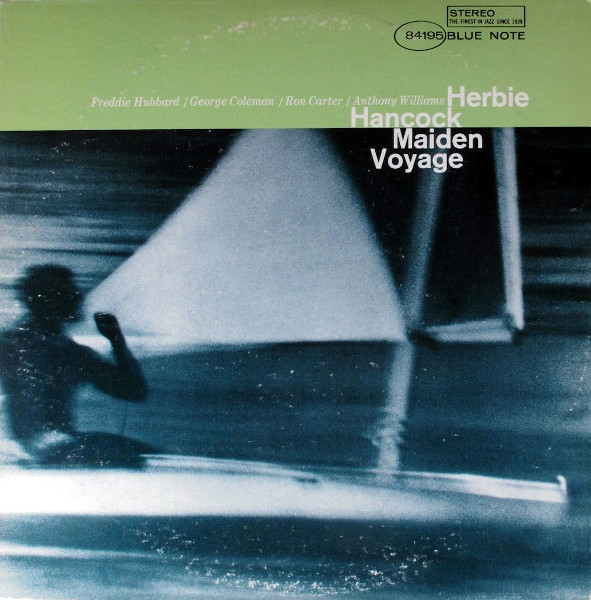 Hancock and his Miles Davis mates set sail for a second album that represents the high-water mark of Herbie’s Blue Note recordings.

If time had been a kinder mistress, I might have waxed soft and eloquent about so many things: the gentle drumming of rain on window panes, the cicadas’ shrill paeans to the long empty silences of summer. But I’ve stolen enough kisses and caresses from time over the last two weeks to make a decent report of Herbie Hancock’s Maiden Voyage. This is the best of his Blue Note recordings, a voyage that sails for new worlds with the able crew of the MDQ, past Empyrean Isles and into the deep blue sea of boundless possibilities where movement and stillness are yin and yang.

Conceived as a series of tone poems on watery themes, Maiden Voyage isn’t so far removed from Wayne Shorter’s conceptual records (Speak No Evil, The All Seeing Eye), which may be one reason why Hancock invited George Coleman to “replace” Shorter in the tenor sax seat. Adding the smooth-sounding Coleman to the quintet makes all of the difference in the world, as his solos often provide a reassuring reference point for the listener in a sometimes bewildering sea of sound. That’s the case on the opening Maiden Voyage, where Hancock and Ron Carter create a near-perfect impression of water (refracted light, ebb and flow) and Coleman sails over it with ease. Freddie Hubbard’s solo on the same song, by contrast, is more concerned with making a splash in the water and disrupting its placid surface. This has led some listeners to regard Hubbard as out of place in the music, but I would argue the opposite: Coleman is the lone non-disruptive force in the music, which makes his contributions more meaningful.

The rhythm section of Tony Williams and Ron Carter are in constant motion; if the pair take few solos, it’s because on many of these songs (Eye of The Hurricane, Survival of the Fittest) they’re soloing the whole time. Hancock, for his part, directs the discussion with splashes of sound and color but rarely steps into the spotlight; like Miles Davis, HH is both the architect and the saboteur.

The songs on Empyrean Isles were just as individually impressive, but collectively the material works better on Maiden Voyage. Take for example the moment in “Survival of the Fittest” where Hancock’s piano teeters, trips and skips to the edge of exhaustion only to explode into a drum solo; a short pause, and you’re ushered back into the civilized world of Dolphin Dance as though the previous madness were only an illusion. This place of roiling seas and placid pools is the unique province of Maiden Voyage and what still makes it such a special journey after all these years.