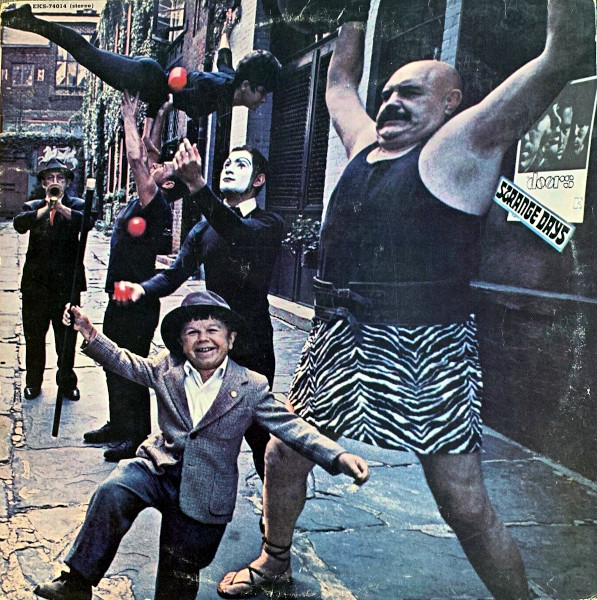 No strangers to success, the band’s dazzling followup joined their debut album at the top of the charts.

Kronomyth 2.0: We want the world and we want it now.

My fourth-grade teacher kept a copy of this album in the classroom for students to listen to during their free time. I never reconciled such a cool album with such an uptight person, but I’m sure anyone would be tense after spending all day with a bunch of 9-year olds. The Doors’ second album is every bit as brilliant as their first album, more musical and less intense than The Doors but still a powerful sensory experience rich with animal magnetism, shamanism and what (on When the Music’s Over) may be the first truly progressive rock guitar solo.

Released a mere 10 months after their first record, which I’m sure felt like an eternity to fans, Strange Days is classic Doors from beginning to end. In between, the group writes a few more timeless classics (Love Me Two Times, People Are Strange, Strange Days) and really explores the music interplay between keyboards, bass and guitar. Douglas Lubahn’s bass is especially prominent on the first two tracks, and it’s a shame he didn’t accept The Doors’ offer to join the band full time. The combination of Ray Manzarek’s keyboards and Robby Krieger’s bottleneck guitar is psychedelic, delicate and intoxicating all at once.

Where the band’s first album burned with a dark intensity (and was still burning brightly when their second album was released), Strange Days has its light moments, even if they’re revealed to be only moonlit. Songs like Unhappy Girl, Moonlight Drive and I Can’t See Your Face in My Mind come dancing from the speakers (I’m pretty sure “Moonlight Drive” is a tango). There are dark moments too, none darker than the spoken poetry of Horse Latitudes, but gone are the burning blues of “Break on Through” and “Back Door Man.”

The album closes with another dramatic opus, “When the Music’s Over,” which was actually part of their live setlist before the first album was released. No doubt the group realized that two 11-minute songs would be one too many for a single album. The performances from Krieger and John Densmore on this track may be the best of their careers. When it’s all over, Strange Days doesn’t leave you exhausted like The Doors, but lingers in sweetly remembered melodies and ghostly encounters. This and their next album, Waiting for the Sun, lack some of the intensity of the first in favor of psychedelic exploration, but I don’t think any band could have maintained that intensity for long.

All selections written and arranged by The Doors.