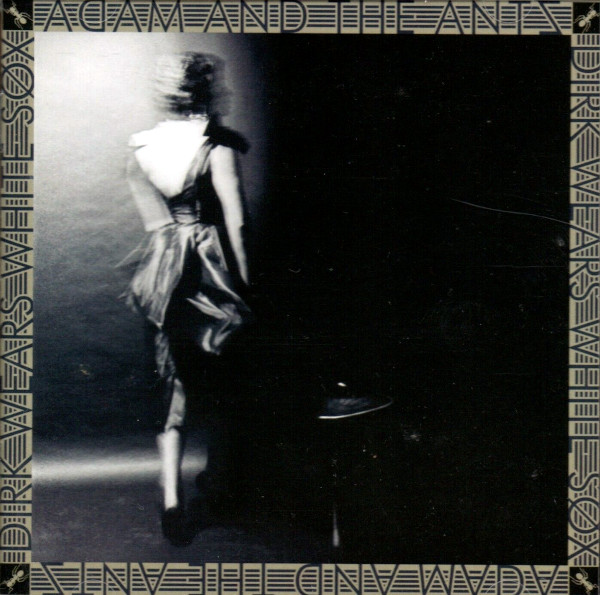 Before trying another flavor (antmusic), Adam and the Ants tried to be a punk band.

The English “punk” bands that formed in the wake of the Sex Pistols eventually went soft, from Adam and the Ants to XTC. Some quickly shifted gears (The Police), others morphed into goth-rock bands (The Cure, Siouxsie and the Banshees, The Damned). By the time the American punk scene took root, most of the original English punks were playing in quirky pop bands.

I mention this because Dirk Wears White Sox is definitely a punk record. You’ll detect a hint of the sophisticated harmonies to come, but mostly this is angular, early punk music propelled by stop-and-start rhythms and texture over melody. Think early XTC meets early Siouxsie. It would have been interesting to hear this group evolve, had Malcom McLaren not shanghaied David Barbe (Barbarossa) and Matthew Ashman for the inferior Bow Wow Wow.

I’ll confess, most of these songs are easily overshadowed by what followed on Kings of the Wild Frontier. Still, Cartrouble (especially the second part), Never Trust a Man, Cleopatra, Nine Plan Failed and Catholic Day are songs that every Adam and the Ants fans should hear. They show a different, darker side of Adam Ant—a side that was more interested in pushing buttons than sewing them on. The rest of the Ants deserve a lot of credit for getting the sound right. Barbe gives Rat Scabies competition for punk’s best drummer and Ashman’s guitar playing, while severe, doesn’t yield an inch to convention. More than a few times, I wondered if even Gang of Four sounded this heavy.

Lyrically, well, I’m not always sure what Ant is on about. Maybe that’s to be expected from an album with such an abstruse (or is it just absurd?) title. Animals and Men and The Idea appear concerned with big things, but Ant doesn’t seem to have the attention span to delve deeply into them. Then again, the album’s rapid movement from one musical idea to the next is half of its appeal. Although initially overlooked by the broader record-buying public (the minor label release didn’t help matters), Dirk Wears White Sox got a second, wider showing in the 80s with some minor track shuffling—and no doubt confused a lot of people who were expecting antmusic instead of artmusic.

Released on elpee in November 1979 in the UK (Do-IT, RIDE 3) with lyrics innersleeve.